(The quote below is courtesy of Ian Browne and mlb.com. For the article, please click here.)

I must really be inspired. Two of these posts in one day??? Must be some kind of record...

It no longer became a question of IF our next subject is a Hall of Famer, it was a question of WHEN. Thank goodness that more than 5% of the voters kept this guy on the ballot for the maximum 15 years, otherwise he would have had to wait for the Veterans Committee to decide (and until the recent adjustments how the VC votes, may have been never). But after 15 years of "thanks for the honor of just being nominated," the Susan Lucci of the Hall of Fame vote finally got his due. Today's subject was supposedly a man of few words and many actions. And his actions brought joy to many of the Boston Red Sox' rabid fan base. Today, as Cooperstown had done the day before, we honor Jim Rice.

Jim Rice was a lifetime member of the Boston Red Sox. In sixteen seasons, he compiled numbers that, compared to others enshrined in the Hall, might not necessarily be up to par. Yes, he had a lifetime batting average of .299, hit 382 home runs, drove in 1,451, and have an OPS of .854. Those numbers could be the reasons why voters waffled about him going into the Hall or not. But it wasn't the numbers that got him inducted. It was his reputation of being a feared hitter that got him there. Reading the many interviews from other HOF's about Jim Rice, regarding memories of the guy, Frank Robinson summed it up for everyone who had to play in the American League against him. When asked about his best memories of Jim Rice, Robinson replied,:

"I don't have any good memories of Jim; I played against him -- he killed us. When the game was on the line, he stepped to the front."
Rice, an eight-time All-Star, won the American League MVP award in 1978, hitting 46 home runs and driving in 139 more. His averages were on the high side: .315 batting average, .600 slugging average, an OPS of .970, almost all career highs.

Years from now, people are not going to remember that it took fifteen tries to get Rice enshrined. People are only going to remember that he was elected for induction into Baseball's Hall of Fame. His plaque will hang in the same gallery as his Red Sox LF predecessors, Carl Yaztrzemski, and Ted Williams before him. The three men together totaled 50 years of manning the seventh defensive position on the scorecard for Boston.

Jim Rice did not make the Archives set in 2001. So it is fitting that the wait be over and we add his cards to the 2011 Topps Archives Project. 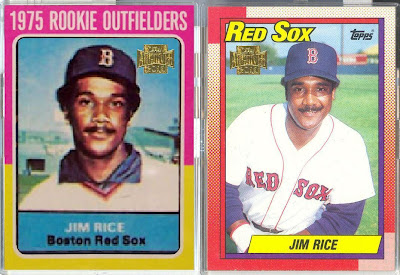 For whatever reason I just found this post now while strolling through.

First of all, how ugly are those 1990 Topps cards. Wowsers. I know I've got a couple thousand in my parents basement, but it makes me think maybe I should leave them there, but I digress.

I think the rookie card is very cool, especially with the collar. Thanks for posting both.