We Are Now More Than Half Way Home...Bob Gibson Has Arrived

Actually, Bob Gibson's card came in some time last week, but again, I haven't had much time to post anything.

Friend of the blog Don Avery from the Topps Message Boards (you remember him...he sent me my first two SP cards from 2009 Topps Series 1 George Sisler and Walter Johnson) sent me an e-mail saying that he had found another SP card, this time from Series 2, that I might want. And again, I replied that I wanted it. So after perusing his want lists and finding cards that he actually needs the trade was set.

I send him a bunch of insert cards from Series 2, and in return, I get 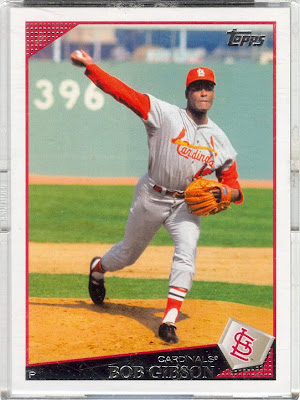 Thank you Don, again. This is a really beautiful card of one of the most feared pitchers in the history of Major League Baseball.

We're down to the final 8 (Marichal, Jackson, Gwynn, Ripken, Ryan, Schmidt, and Brooks and Frank Robinson). And it's only been one month since the hunt started. I'm currently in talks to trade for Reggie, and am in contact with another who might send over Frank (key word being might) so the quest continues.

Sweet looking card JayBee! I got the 3 of the SP's from Series 2that I was looking for off ebay. Spent about $45 total, which I didn't think was to bad. Ryan, Ripken and F. Robinson will be in my PC shortly!

I'm watching Gibson's 1968 World Series Game 1 about 30 minutes at a time (as I walk on the treadmill). He was something to watch. He didn't mess around. He just wanted to get the dang ball and throw a strike.