What I Bought at the First Ever FansEdge Convention

Call it lousy timing because the National is next week. Call it "because I showed up two hours before closing." But overall, I wasn't totally impressed with the FansEdge show at Rosemont on Saturday. And based on what I saw, I should have been.

Why? Because they had enough distractions to keep kids busy, but because I arrived at the show at 3:00 p.m. (the place closed at 5:00 p.m. on Saturday), I missed most of the fun stuff. In no other card show, not even the National, was there room for those inflatable moonwalk things, a nine hole mini golf course, and a wrestling ring (now I'm mad that I missed the wrestling...) in the same place.

And the vendors. Now, if you've ever been to a Sun-Times show, or any other show at the Donald Stephens Convention Center, they traditionally are held on the second floor. All the vendors crammed together and as long as the regular sellers continue to get their favorite booths on the floor, are easy to find. The FansEdge show was held on the first floor, where they normally hold the National. The booths were very spread out, and as usual with these card shows, there were a lot of vintage (from 70's and earlier) booths, the usual unsealed box sellers, a couple of corporate sponsors (Chicago Sky and Chicago Slaughter), a couple of "why-are-they-here" booths (the ones selling Pez and Webkinz come to mind), and a few newer-product sellers.

As the biggest product to come out of the market lately has been Topps Allen & Ginter, there were lots of this product at many of the booths. Whether you're looking for unsealed boxes, just a few packs, or singles from the base set, any of the inserts, or even a beard relic from the longest beard champion guy (at least that's what it looked like...creepy), you're pretty sure to find it here. As I have not gotten my A & G set yet from the Bay, I wasn't really into looking for anything...until I found the one booth that had mini inserts for sale.

Now, last year at the National, I bought a card of Gloria Macapagal-Arroyo, the President of the Philippines. Somehow, though, I lost the card at the show. This year A & G foreign theme was National Heroes, and on the checklist representing the Philippines was José Rizal. I had to have this card. And the seller that I talked to had both of these cards. And for $5.00, they were mine. 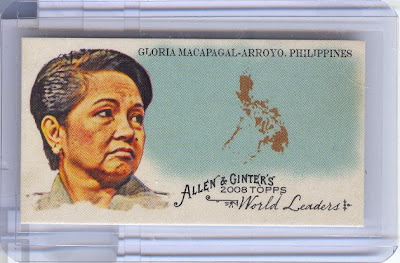 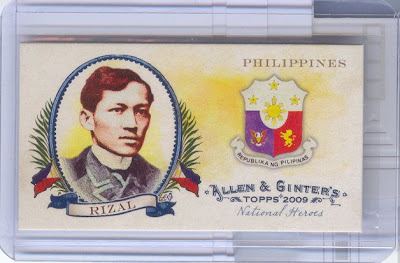 2009 Topps A&G National Heroes José Rizal.
But those aren't the only cards I bought at the show (and if you've been following along, I think you know where I'm going with this...)

My real reason to go to the FansEdge show was to see if I could knock out a couple of the 2009 Topps MLB Shortprints that I'm still looking for. I was at seven at last count, and the same person that sold me the above A & G cards had a TON of SP's, from both series. However, he only had two that I needed. He originally had them both priced at $25.00 each, but said he'd sell for $20.00 per card. I knew I could go for lower, but they were right there, and I knew that other than the eBay experience (where I'd have to wait, and wait, and hope to see if I don't get outbid) I wouldn't have a better opportunity than right NOW to take them. So, for $40.00, I am now the proud owner of: 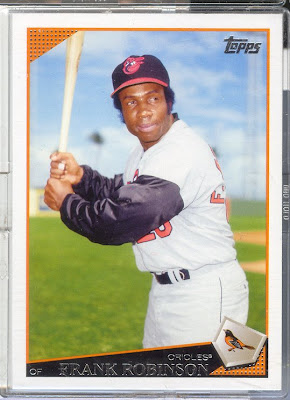 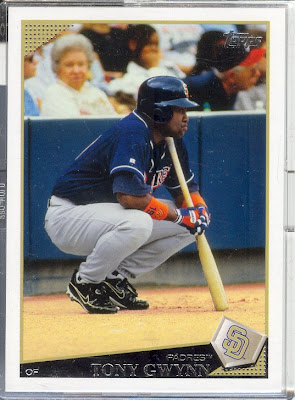 Tony Gwynn #520.
So now, I'm down to a final five (Ripken, Ryan, Marichal, BRobinson, and Schmidt) in my quest for completing the 2009 Topps MLB short print sets. The quest continues.

I think that if:
the show would have been a lot more enjoyable. I would have loved to see the wrestling matches they were holding while the show was going on. I wouldn't have minded taking a bit more time at each booth instead of breezing through quickly. I'm sure the show was a hit, even though it was close to the National, and many of these same sellers (probably except for Mr. Mint) will be going to Cleveland next week. But I can't give a true opinion of the show because I was only there for two hours. Still, I did get something accomplished, and can't wait for the Sun-Times show later in the fall.
Sincerely,

P.S.: Dose of reality time for the bloggers...I asked at least 20 vendors selling Allen & Ginter if they knew that the Ginter Code was cracked. All were surprised. None knew about it. None wanted the word spread out either. jba
Posted by James B. Anama at 5:00 PM

I found a link for the Marichal:

Nice pickups! Even though eBay is cheaper most of the time, there's something about the hunt at a card show that makes those kind of pickups even sweeter!