My biggest complaint about Topps in the last few years has been the reduced number of cards in their flagship set. Growing up, it was always 792 cards to a set. That was the standard. And with 792 cards, you could average a full 25-man team, plus their manager, a couple of promising rookies, a team leader card, and still have room for All-Stars, League Leaders, and Record Breakers. Regardless of the number of cards printed in the "over-produced era" of 1986-1994, each Topps set truly was a "yearbook" of the previous season.

Then the popularity of baseball crashed.

Then the card companies decided to cut back on the number of cards in their regular sets.

And this was before it was decided that we as collectors (those who stuck around during the dark times in our Hobby) needed...MORE SETS!!!

And that leads me to my point. While Topps makes sure that most of the starters on all 30 teams get a card, along with maybe three or four starting pitchers, the first two pinch hitters off the bench, the closer, and maybe the best set up man (or two), along with a couple of "rookies," they leave out a number of players who the following year, could make an impact during the season. Not only does this leave egg on their faces, but it makes them look bad because the other company has actually produced sets with more than 1000 cards, and includes almost EVERYBODY!!!

In this year's All-Star Game, five players selected to both teams do not have a 2009 Topps card, or a card in the 15-card team set. They are: Each of these players have had Topps cards in the past, but because of "space limitations," were not included in this year's set. All five should...SHOULD...wind up in the end-of-the-year Updates and Highlights set, not only with an All-Star card, but a regular card to boot.

Which leads me to my next problem, which surprisingly, had a quick solution. Because these five do not have cards, how do I represent them in my All-Star binder. Sure, it would be easy to find an older card for each of them, but it would look awkward, especially since all the other cards are from 2009.

Remember those bonus cards from the 15-card team sets? The cards of the teams' mascot, stadium, manager, or special person/player? Fortunately, all five of the teams that the "snubbed" players represent had their team mascot as the bonus card. Using these cards, I am adding them to my All-Star binder. Yes, it looks strange to see a costumed creature's card amongst the players, but I need something to represent everybody.

So without further ado, let's meet the five All-Stars who do not have Topps cards, and the cards I am using to represent them in my binder: 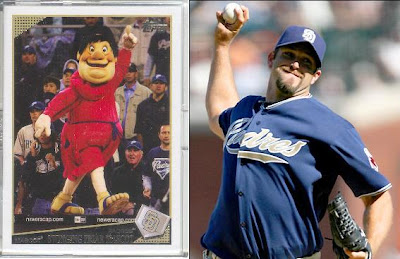 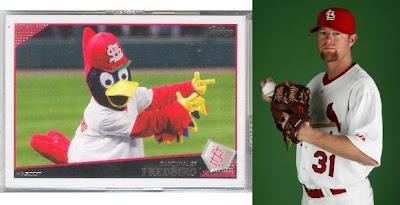 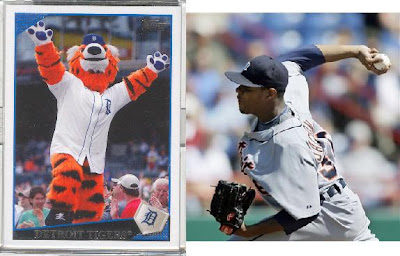 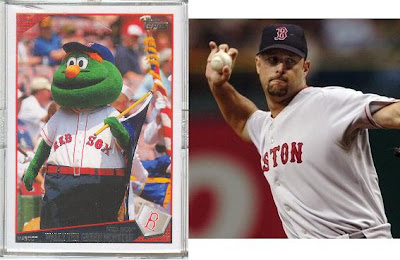 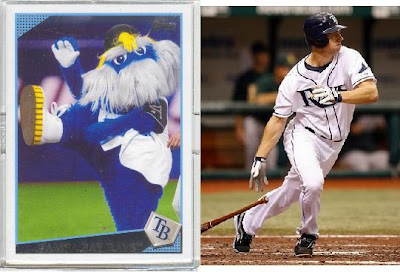 And Raymond stands in for Rays jack-of-all-trades Ben Zobrist.

P.S. Now you may be wondering why I even bother setting this all up (the binder, the cards, etc). It's because I really love All-Star Games, and as you know, the players shuffle in and out so quickly, that sometimes it's hard to keep up. I actually use the cards to tell me who's in the game, who hasn't appeared yet, and where each person appears in the lineup card. Yes, I am a geek!!! But hey, anything to keep the excitement going. And, I've done this for years!!! So why stop now??! jba
Posted by James B. Anama at 9:00 AM

Email ThisBlogThis!Share to TwitterShare to FacebookShare to Pinterest
Labels: 2009, all-star, topps, WHAT?

How is it Wakefield got snubbed? I can almost understand the other guys, but Wakefield has been a staple on the BoSox for years.

Hey, THATS the Wally card that I saw a long time ago that I have been looking for! Its in the team set? grrrr, more purchasing.

Just a thought, but isnt shorthanding the flagship set just a reason to create the Topps update set that comes out later (at least in the last several year)?

This kind of thing never happened back in the good old days of 792. I used to do the same thing - setting up the All-Star Game line-up and adding and subtracting cards as moves were made throughout the game. Maybe I'll bring that back this year!