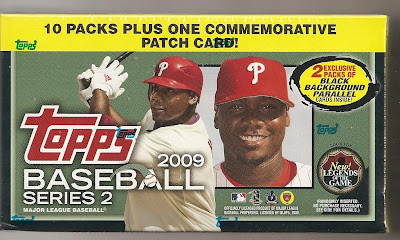 One blaster box of 2009 Topps Series 2 sold at Walmart. Wait, what does that say on the side..? Courtesy of Nachos Grande.
As reported in various blogs around the Hobby Community, it looks like the infamous Topps Black Background and Throwback cards are slowly making their appearances in blaster boxes sold at Walmart and Target respectively. Now if you recall, certain series 1 blasters sold at either of these establishments had full...that's right...full boxes of these stealth parallel cards. And after a bit of attitude adjusting and acceptance, collectors welcomed these cards into their collections.

Now series 2 blasters have arrived. And instead of full boxes of these cards, people are reporting that two of the ten packs within each blaster contain these rare treasures.

It was easy (after knowing the codes) to find and buy either stores blasters to complete a set of Series 1 Black Background or Throwback. Now Topps has thrown a monkey wrench in the plans of those who wanted to complete the 660 card set by only putting two packs per box (the rest being the regular cards). Which, in normal cases wouldn't have been a bad thing and should have been how series 1 was sold and packed out...

SO WHY CHANGE THE DISTRIBUTION METHODS NOW???

What has now happened is that it will become more challenging (ahem...more expensive) to complete series 2 of either set because they've reduced the number of packs that would have them in every box. As stated before, if the distribution method here was done back in February, it would be no big deal. In fact, it would have been more of a pleasant surprise in every box than it was the extreme shock we all encountered when the series 1 boxes first appeared on store shelves.

I guess my biggest problem is the inconsistency in distribution between both series. As a consumer, I'm disappointed that they've switched it around now. I would have preferred full boxes of either parallel provided that they were labeled properly (and in this current case, it does say "two exclusive packs black background parallel" on every box). But this is unacceptable. And I have a hard time coming up with any possible reason why this was done other than to make more money. In a normal economy, yes, this wouldn't have been so bad. But with more and more of our hard earned money going to other, more important, places, this was not a good idea.

Sure, there will be people who will find ways to complete a set of either parallel. It's not impossible. Yes, many collectors like a good challenge, and will no doubt not be discouraged and will go forth and conquer this set. But for me, I'm not to thrilled with this turn of events.

Makes me kind of glad that I didn't attempt to complete either one.

Email ThisBlogThis!Share to TwitterShare to FacebookShare to Pinterest
Labels: 2009, commentary, topps, WHAT?

I'm thrilled about this turn of events. I've been spending too much money on cards lately, and this way I will end up saving $40 to $60 that I would have spent on Target throwback blasters.

This is the last straw! I will NEVER buy cards from Walmart again (I bought over 20 boxes of series one, which are now essentially worthless). Topps and Walmart - with all due respect...you SUCK!
Former consumer