Get Those Gloves Out...It's Derby Time!!! 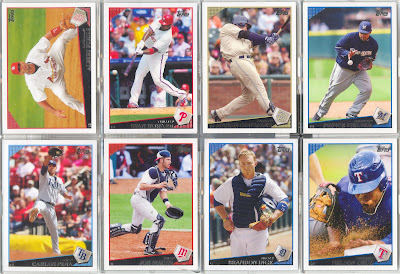 Tonight, eight All-Stars battle it out in one of the biggest spectacles in baseball. Yes boys and girls, it's Home Run Derby night.

Above are the eight competitors who will be swinging for the fences in a battle to see who is the most prolific home run hitter of the derby. For the National League, all four 1B selections will participate. For the American League, it's Joe Mauer, and three guys who in the last three days, were either voted onto or were selected as injury replacements for the AL team.

Let's review the HR totals this year shall we? For the National League:
The mashers the AL will send include:
It's easy to say that Pujols is favored to win this year, after all, it's his home park. But anything can, and has happened in these events where the least likely participant winds up winning it all.

May the best man win. And oh yes, expect these eight guys to have Home Run Derby cards in this year's 2009 Topps Updates and Highlights set. (We'll get to the speculation about this set later on in the year...)