I have finally finished simulating the All-Star Games using my 2004 End of Year All-Star Teams. And just to give you an idea as to how the one game ASG went, let's just say that the SBS program I've been using is really good. The simulated game perfectly captured what has been going on in real ASG's during the middle of the past decade (this should already give you an idea as to who won the game).

Last season's NL team won the seven game series, but lost the one game ASG. Will the same thing happen this year? Just wait and see.

The National League wins the series 5-2, and the ever important "anything goes" series. The seven game series is tied at 9 series a piece. But the NL presently has a 9-8 lead in the one-game ASG. This seventh series seems to be a good indicator as to who wins the big one. Does this mean good luck for the senior circuit?

For the official All-Star Game, I decided to just simulate one game and one game only. The starting pitchers were Clemens and Santana and I let them pitch two innings (unless they struggled badly). The rest of the pitchers would get one inning each (unless they struggled badly). The position players were replaced every three innings. No pinch hitters here, (as in previous tries, the pinch hitter is taken out of the game). The DH's (Jim Thome of the NL and David Ortiz of the AL) were never replaced.

The starting lineups, first for the National League (I'm using 2005 Topps cards because these are the cards I used to represent the players on my All-Star teams): 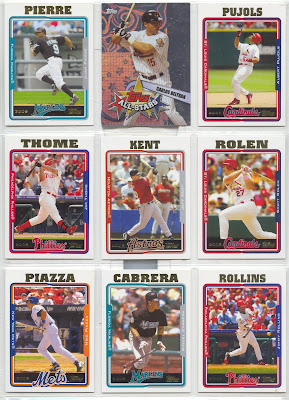 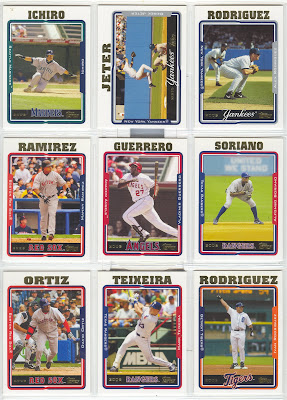 The 2004 AL All-Stars beat the 2004 NL All-Stars by a final score of 2-1 in a very evenly matched, exciting game. Pitching was the name of the game today, and both sides were dominant. 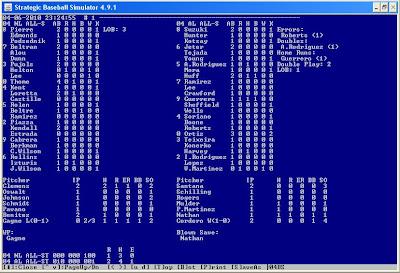 Your starters, Roger Clemens and Johan Santana. Francisco Cordero is the MVP.
If this game actually existed, the MVP award would have gone to Francisco Cordero (W, 2.0 innings, four strikeouts). Cordero takes the win , Eric Gagne gets the loss, and the only players who didn't get in the game were pitchers Livan Hernandez, Jason Isringhausen, & John Smoltz of the NL and Mark Buehrle, Troy Percival, & Mariano Rivera from the AL. Now both the seven game series AND the All-Star Game are tied at 9 per league going back to 1987. 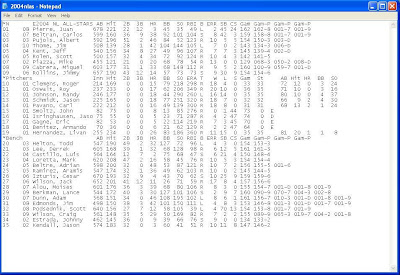 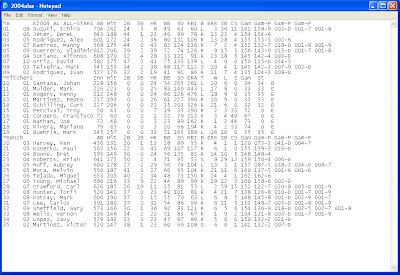 Now that the 2004 All-Star Games are officially over, at 9:00 AM CST on Thursday, I will introduce the 2005 End of Year All-Star teams. Simulations for games with those rosters to come hopefully by Sunday night.