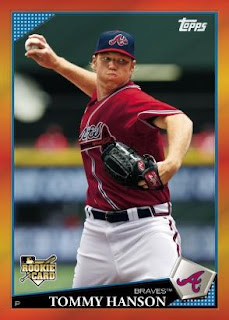 Those holding those Red Hot Rookie Redemption cards better get them logged in to Topps quickly as it has just been announced that card #4 belongs to none other than Tommy Hanson of the Atlanta Braves.

Tommy made his major league debut on June 7 against the Milwaukee Brewers. He has appeared in seven games so far, all starts, and currently sports a 4-0 record with and ERA of 2.45 and has struck out 25 (as of July 15, 2009).

Although it's not an autographed card, Braves fans will want to add this card to their collections. Ladies and Gentlemen, START REDEEMING!!!