For the first time since 2004, Topps and the Chicago Cubs are reuniting to giveaway cards during select home games.  According to Topps' Twitter account, an 82-card set of what looks like exclusive Topps Archives cards that will be given out over 4 home games in 2013.

Here is a scan of the cards (in sheet form): 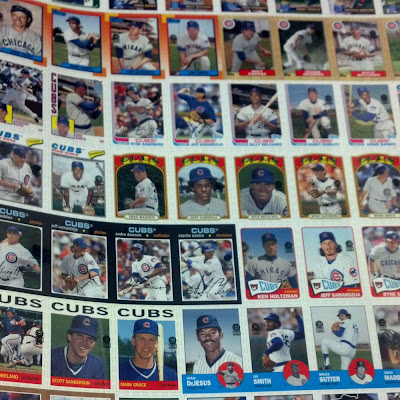 According to the Cubs' website, the first 10,000 fans in attendance will get these sets.  The dates:

As much as I'd prefer to have the reprint card program return (similar to the giveaways from 2001-2004), this is a nice alternative.  At 82 cards, it's going to be a fun set to go after.  No word yet as to how the cards will be distributed.

Now I'm off to see if the other 29 teams are going to have similar giveaways.  Or at least that Topps will be involved in somehow.

I think I see a new Ron Santo card. Maybe I should set up a new Ebay search right now.

And I see a new Dawson in the batch too! Hackenbush and I are on the same page.

I'm with you JayBee I would rather have seen actual reprints, but some of these cards look awesome! I won't get the whole set, but probably pick up a couple of Banks, Santo, etc.