It's Retro Sunday!!! Thanks to the Topps Card Randomizer, introducing the Random Topps Card of the Day for Sunday, January 13, 2013: 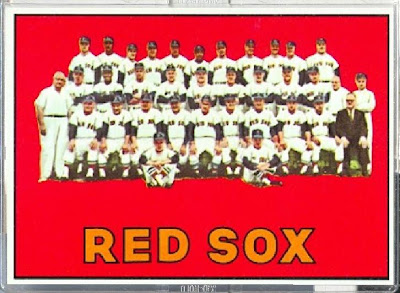 Well, it's back to normal on Monday. Tomorrow's card will be: 1988 Topps Traded #108T. Post will arrive at 1:00 PM CST. Come on back then to see what the Topps Card Randomizer gets us to look at then.

I'm increasingly enjoying team cards. For the value alone...how many players and coaching staff can we fit in to one card?!

The color is rocking on that card.

Almost every team card prior to 1968 had the team cropped and superimposed on a solid color background (usually yellow).