Now That I've Calmed Down...You Want to Know What I Got?

I finally got around to breaking open the packs that I bought this morning.  I'm liking the cards and the design specifically now that I have them in hand.  Many of the shots are really up close, and you can see what many of these players really look like.  I do like many of the action shots, although it seems that Topps has resorted to using companies like Getty Images to get their pictures.  If they've had to lay off some of their photographers, you have to find other ways to get shots, I guess.

So first of all, ladies and gentlemen, here is the first card from the first pack that I opened for the 2013 Topps Baseball Card Season:

The big free agent signing of the Nationals in 2011 is the subject of the first card of the year.  Let's look at the card back, something that I would like to request Topps to include when they put their previews out onto the Internet: 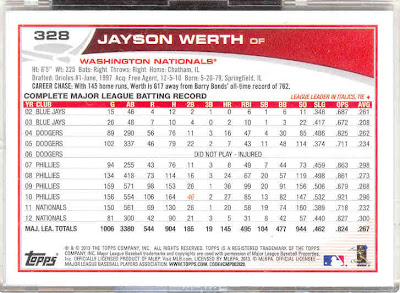 I love the backs.  It incorporates the curved home plate (I still like to think of it as a spaceship), bright colors, easily readable text, and look, they've even incorporated the big theme of 2013, the Chase.  Every player card I've seen includes a "Career Chase" line.  In the case of Werth, "With 145 home runs, Werth is 617 away from Barry Bonds' all-time record of 762."  Other "Career Chase" lines include:

The rest of the cards in the first pack:
Wait, including the Werth card, that's (one...two...) thirteen cards.  I got an extra card in my first pack.  Yay!!!

I opened the other four regular, two jumbo, and one box.  I will tell you now that none included any relics, autographs, or those wonderful short-printed "Out of Bounds" inserts (I think...will have to double check).

I hope you're finding 2013 Topps in your neck of the woods.  In the meantime, I am going to start checking on the Bay for master sets.

You're making me want to pick up another blaster on the way home.

Thanks for showing the backs: as some of us get . . . er . . . more optically challenged, it's nice to see a legible format return. As cool as the 2004 design was, those backs had miniscule type. I think 2005 did it best -- narrow font, but tall enough to read -- and they even managed to fit in a picture on the back!