(I apologize that the Random Card of the Day segment did not appear as scheduled.  In an attempt to try and eat better...more veggies...I must have eaten something that I should not have and was sidelined with a swollen foot that kept me away from my basement computer that had my work for Sunday's post.  Here is what should have appeared at 1:00 pm CST on Sunday, January 27, 2013).

It's Retro Sunday!!! Thanks to the Topps Card Randomizer, introducing the Random Topps Card of the Day for Sunday, January 27, 2013: 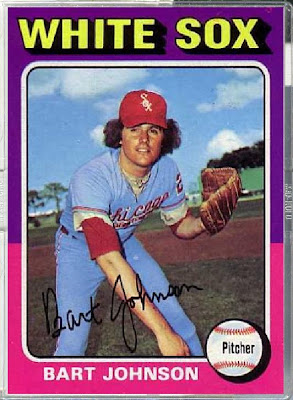 Well, it's back to normal on Monday. Tomorrow's card will be: 2011 Topps #174. Post will arrive at 1:00 PM CST. Come on back then to see what the Topps Card Randomizer gets us to look at then.

Love the name, love the hair. All dudes named Bart should have that hair.