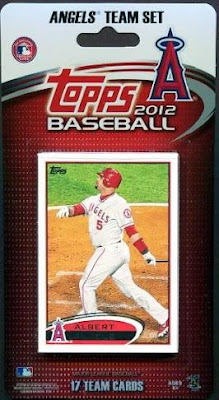 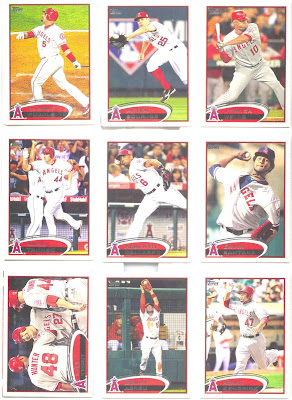 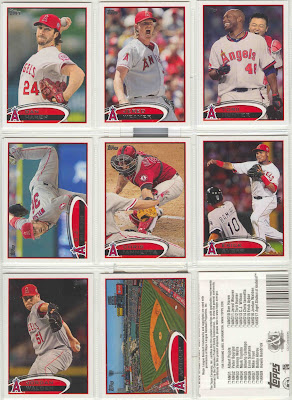 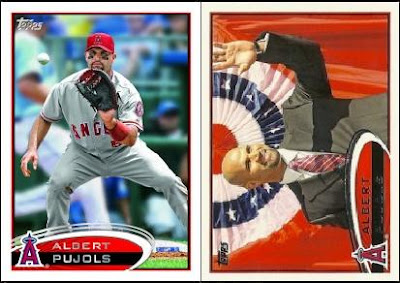 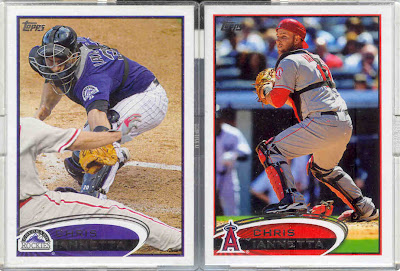 So of the 16 players included in this set, only two feature pictures of players that you will only find in the retail set. The 2012 retail sets contained a lot of variations between the eponymous base and traded sets and the retail ones, which is great if you're a fan of team sets and want a bit more variation to your regular cards. But I guess in the case of the Angels, most of the retail set cards of even the new players were used in the regular set (C. J. Wilson prime example of this).  Speaking of 2012 Los Angeles teams...

Next week's featured set will be the 2012 Los Angeles Dodgers. Hope you'll be here when we compare the cards from the retail set to their counterparts found in Topps and Topps Update Series.

P.S.  hiflew:  To save time, I was looking up Dan Haren on the BCCM.  He didn't show up, so I assumed that he didn't have a card.  It turns out that the BCCM misspelled his name as Dan HEREN. jba
Posted by James B. Anama at 9:00 AM

That Iannetta photoshop is what is wrong with Topps currently. Obviously it is a Rockies uniform, but Topps tries to play God in order to beat others to the punch. But there are no others right now, so what is the hurry to photoshop new uniforms on players?

I'll fix the spelling, thanks,