Is This Real?: 1956 Bowman Mickey Mantle

I get emails all the time from people asking about cards and how much they are worth. This one threw me for a loop. After getting permission to post the pictures onto the blog, I am finally getting around to writing this one.

Patrick Flachs sent me this email on Monday, December 31:

I have a Mickey Mantle outfield New York Yankees card. It says #1 anC it is a Bowman card and I think it is 1956. Can't find the value of this card. Hoping you could help. He is holding a bat and looking to the right and it is brown card on the outside in a circled picture.

Okay, a few red flags here. Bowman and 1956. Now we all know that Topps acquired Bowman before the company could make a set in 1956. So I responded:

Bowman did not make cards in 1956 as the company was bought by Topps that year. Also, none of Mantle's cards were #1, Topps or Bowman, during his playing days.

I asked him to send a scan of the card so I can get a closer look at it. This is what he sent: 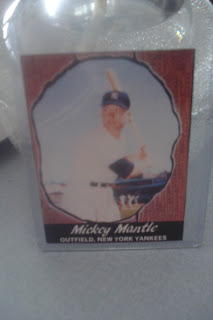 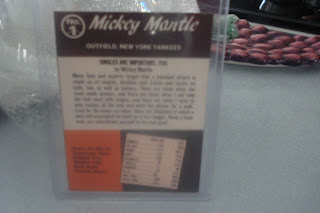 What many might not know is that before the acquisition, Bowman sent surveys to boys (about 324) to determine what the design would be for their next baseball product. After surveying kids in New York, Chicago, and Philadelphia, the choices were narrowed down to three: a knothole design, a two-picture design, and a full-bleed design with a black box holding the name, position, and team affiliation which looks similar to their 1953 effort. Books were created in a top-secret file titled "1956 Baseball Card Preference Study." But then Topps bought out Bowman, and these books were thought to be lost to the annals of time. It was not until 1983 when two of these books were found in the personal collection of Woody Gelman, the legendary Topps designer, who had saved these as keepsakes. The books, which were put on auction, sold for $10,440.00.  The Topps Archives also did a feature on these books.

Now Keith Olbermann, to call him a collector is an understatement, also had a copy of this book and brought it to Topps Headquarters. The designs were eventually used to create what is now 2003 Bowman Heritage. The knothole design was used for prospects cards within the set.

I was stunned. STUNNED. Only because I remembered the history of how the Bowman Heritage set came to be (even though I never collected it, I should have the Beckett magazine somewhere that explains all of it...see, printed magazines are worth something after all). So when I saw the pictures...my jaw dropped. I had never seen this card before, and had to ask him:

Where did you find this card? While Bowman did not have a set because Topps bought them out...The card in your hands (the knothole design) would have been an example of what the 1956 Bowman set would have looked like if they made it...

If the card is indeed authentic, then what you have a real find on your hands as not too many of these cards have ever been seen before. Would you mind if I used your pictures and put them on my blog? I'm sure that there are people out there who would know a lot more about your card than I do.

After looking at the scans, all I can say is, "Wow!"

While Mr. Flachs did not go into specifics as to how he found this card, he did offer to send better pictures. Here they are: 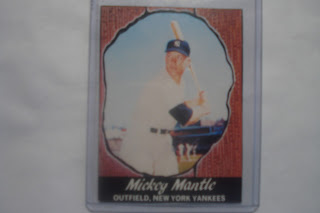 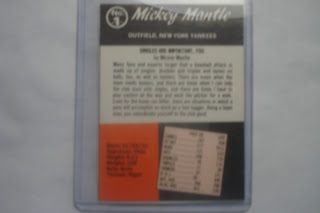 Doing a quick check online, I did find one other picture of this Mantle card. But there is no explanation as to what it is, or anything about it's authenticity.

I also know that Hires Root Beer, in 1958, used this design for their baseball cards. But the checklist starts with #10 (Richie Ashburn), and if you look at the example of the Aaron card below, there is a dash between the position and team name. The Mantle card above uses a comma.  (Mantle was also not on the Hires checklist).

Okay, I am no vintage expert. All I have are old books that focus on cards of the past, and of course, the interwebs. I even went onto the Mantle Baseball Cards website and didn't find anything.

I did tell Mr. Flachs that I would put this on the blog to see if anybody out there can verify the truth of this card's existence, and if so, can give an estimated value on the card if it is fact real.

I wish the guy the best of luck.  If his card can indeed be verified as authentic, he has a real find on his hands.   But can somebody, anybody, provide more insight and information about this card?  I think we could all use the history lesson behind this card.

Email ThisBlogThis!Share to TwitterShare to FacebookShare to Pinterest
Labels: 1956, bowman, commentary, Is This Real?

Alas, I think it's bubble-bursting time.

I think it's a Baseball Cards magazine cut-out. The card stock, color, etc. suggests it. I've actually got one of these somewhere in my stuff, though I'd have to go digging for it.

There's one example of it on eBay right now (I've got the Jackie from this strip too, but damn it, not the Washington Nat'l League Winfield!): http://www.ebay.com/itm/Baseball-Cards-Magazine-w-cards-Oct-88-Mickey-Mantle-Jackie-Robinson-Winfield-/190777786439?pt=Vintage_Sports_Memorabilia&hash=item2c6b3e0047

Let me know what else you hear, but I think this is what's up.

bob lemke was giving these panels away for free (sase) earlier this year.

I have one of these cards and i csn assure you that it came from NO MAGAZINE. I have had this card in my first card collection which was started for me before I was born by my Father. For my 5th birthday, I was given this card along with what i like to call the heart and soul of my collective machine, by my father, who is solely responsible for my love of collecting cards, and my love of the game. I am 42 years old this coming January