Wow, it's 2013, and I actually have finally gotten around to finishing the simulations for my 2011 End-of-the-Year All-Star Teams. For those of you who remember how this all works, you know that I create All-Star Teams (and have done this since 1988). And thanks to the Strategic Baseball Simulator (aka SBS), my fantasies had become somewhat of a reality as I could finally see which of the teams (I did one for the NL and one for the AL) would have won a game (or series of games) if they were to have competed against each other. You can see the on the sidebar the results of those games.

I'll tell you the truth. The simulations were actually finished in September. But for some reason, I forgot to run the one-game, winner-takes-all All-Star Game. Well, a quiet night at home allowed me to get this going. And it was a real nailbiter too (well, it became one, after the first attempt was hijacked by the computer...and it was a slugfest before I had to pull the plug). I promise as soon as the SBS people get the 2012 rosters together, I will get the simulations for those games going (hopefully before the 2013 All-Star Game).

I simulate seven series of games, pitting the six starting pitchers on each side and a set roster of eight or nine position players (somebody DH's when the AL All-Stars "host") against each other for the first six games, and then a seventh series of games where the rosters and the starting pitchers are chosen randomly. Each series consists of 10,000 simulated games. The winner of each series = the winner of a game. Presently, the National League All-Star Teams have a 14-10 advantage over their American League counterparts, and 13-11 record in the one-game All-Star Game (a far cry from reality, considering that the NL has only won 7 real All-Star Games since 1987).

Here are the results from the seven series simulations:
The AL takes the seven game series 4-3. In 25 simulated series, the NL still has a comfortable 14-11 record against their AL rivals. With the AL also winning the crucial seventh game series where just about anything goes, would the 2011 AL All-Stars win the one-game ASG? The team that wins the seventh series has won the final game 15 times.

For the official All-Star Game, I decided to just simulate one game and one game only. The starting pitchers were Kershaw and Verlander and I let them pitch two innings (unless they struggled badly). The rest of the pitchers would get one inning each (unless they struggled badly). The position players were replaced every three innings. To follow the new rule that dictates that the ASG be played with designated hitters, regardless of which league hosts the game, the DH's (Mike Morse of the NL and Michael Young of the AL) were never replaced.

The starting lineups, first for the National League (going forward, I will be using cards from the same season instead of the next one as I had in previous years.  Maybe I'll use the images from my other blog, and go back through all the other posts and replace the pictures with the proper year's cards): 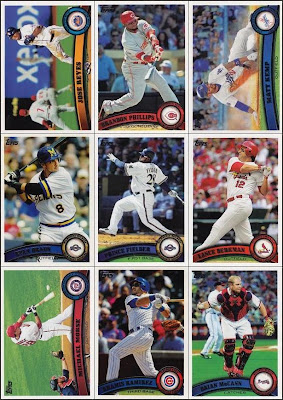 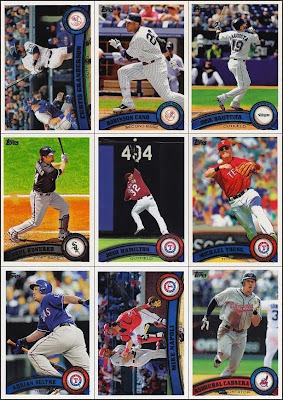 The 2011 AL All-Stars beat the 2011 NL All-Stars by a final score of 1-0. Both pitching staffs allowed six hits, and shut down the hitters from both sides all game long.  That was until the ninth inning though. 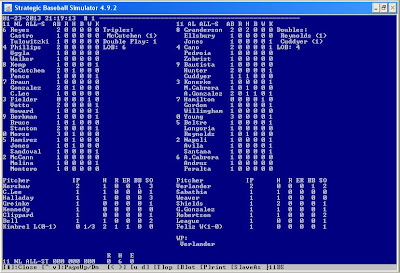 If the game actually existed, the MVP would be Michael Cuddyer, who went 1-1 stretching what should have been a single into a double, and then took a chance off Adrian Gonzalez' single (and Hunter Pence's arm) to score from second.  Neftali Feliz earns the winning decision. Kimbrel takes the loss, and the players who did not appear include pitchers John Axford, Yovani Gallardo, and J. J. Putz of the NL, and Mariano Rivera, Jose Valverde, and C. J. Wilson of the AL. 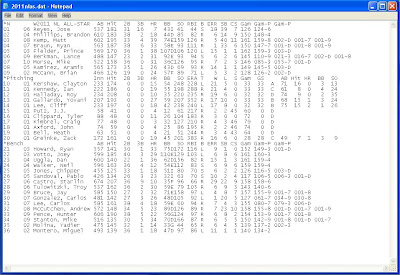 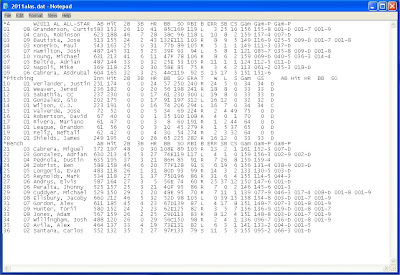 Now that the 2011 All-Star Games are officially over, I'll be waiting until the SBS people get the 2012 .DAT files together so I can start work on the 2012 rosters and simulations. Maybe I can get these in before the end of the year (at least before the All-Star Game). Maybe this will get me going a bit and go back and do that tournament blog going