Since 2006, Topps has been adding insert cards that are specifically exclusive to Walmart, Target, and Kmart. Blaster boxes (those boxes with ten or twenty packs in them) come with a bonus pack (three or six cards per pack, depending on the number of packs in the box) of insert cards that could only be found in one of the above three stores. There was never really any mention of these in the hobby guides, other than maybe an incomplete checklist. 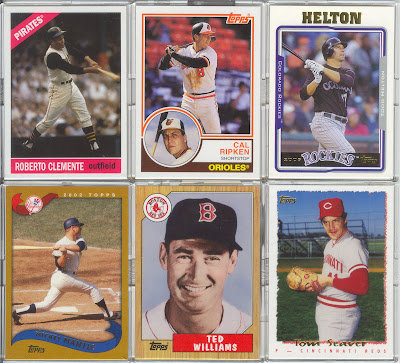 2006 Topps Wal-Mart insert cards. Topps first attempt at store exclusive insert cards.
In 2006, Walmart boxes included insert cards for a "Topps Through the Years" set, featuring current and legendary players within the previous 54 years of Topps baseball card designs (1952-2005). The active players were featured with their current teams, so you had Ivan Rodriguez as a Tiger representing the 1999 Topps design, or Alex Rodriguez (who along with Topps Exclusives Barry Bonds and Mickey Mantle appeared in three cards within the set) as a Yankee in a card with the 2003 design. This was a nice looking set, if they had tried to do it similarly to the 2001 Topps Through the Years effort and used players from those decades with the matching designs. I mean seeing Ted Williams in a 1987 Topps design and Tom Seaver in a 1995 card just looked ugly. And because the cards were sold out of sequence, meaning you get card #'s 1, 2, 35, 52, and so on instead of 1-18, it looked weird seeing blank pockets when placing a complete series in nine-pocket pages.

To make completing the set more challenging, probably because it was a first time effort, the way they were distributed was different every time. Six specific cards from series I were found only in the 3 card packs (10 pack blasters), six others could only be found in the 20 pack blasters, and the final six were seeded in the retail packs not even in the blasters. There were no cards included in series II blasters, so that meant all 18 cards could only be found in packs!!! The Updates and Highlights blasters saw the return of exclusive inserts, but this time, all 18 cards were seeded evenly within the boxes, whether they were 10 or 20 pack blasters.

The following year, Topps gave Target their own exclusive insert set to include in blaster boxes. In boxes of 2007 Topps Series I and II boxes, Topps included cards of Ted Williams and the "Road to .406" with each card recounting Teddy Ballgame's run in hitting above .400 in a season. The fact that nobody has hit that mark since (although many have come close) shows how difficult it is to keep that high an average. There were only 36 cards in the set. So Topps inserted cards from a ten card set called "Mickey Mantle, A Life in Baseball" in packs and boxes of the Updates and Highlights set.

Walmart, in their 2007 blasters, did another 54 card set, featuring current players in past designs again, but this time expanded beyond their catalog of designs, and incorporated card designs from their Topps 205, Topps 206, Allen & Ginter products, older card designs, as well as designs from classic Japanese baseball cards. This became the precursor to this year's 2008 effort "Topps Trading Card History."

Kmart was also given an exclusive insert set within their blaster boxes. In 2007, Topps biggest theme was "Generation Now" featuring the young stars of MLB and their preparedness for big league superstardom. In all three series (I, II, and U&H), 18 card segments of a set called "Generation Now Arrives," featuring the young stars of today, were included in Kmart boxes. Confusingly numbered GNV (possibly for Generation Now Variation...Beckett erroneously calls them Vintage), each card featured a player and a certain statistic, whether it was from one game, or a series of games, where that particular person excelled.

In every case, each store did very well selling blaster boxes and packs that contained these cards. The concept became such a huge success that they repeated the concept in 2008.

This year, Walmart is selling blaster boxes and packs of Topps Baseball Cards with insert cards based on the paintings of renowned sports artist Dick Perez. Each series will include 10 cards.

2008 Topps Wal-mart Dick Perez Art Cards, this should be a very beautiful set to collect.

Target is selling boxes and packs with cards based on the famous T205 design (Target 205???). Fifteen cards come in each series.

Kmart, within their blasters and packs, have cards called "Rookie Card Variations" which as the title describes, features players who qualify for MLBPA's rookie card designation, utilizing the 2008 Topps design, but with gold colored borders and different pictures than what appears in the regular set. There will be 15 cards per series.

2008 Topps KMart Rookie Card Variations. Love the gold borders. Very hard to find. If your area does not have a KMart, then good luck finding these babies.

Topps is also expanding the store exclusive inserts outside the eponymous brand. Topps Heritage blasters sold at Target featured the mini versions of the cards found in the regular set, while those sold at Walmart got 1959 Topps Heritage versions of the Dick Perez cards (same pictures, but with the 1959 Topps design). No word yet on if Kmart has an exclusive insert set with Heritage.

These cards rarely, if ever, have their prices included in the guides because they are not seen by the Hobby shops. And the only places you can find these cards on sale as completed sets are on auction sites. Since they are not often included within the checklists of the regular sets, they are overlooked by the Hobby, which is a shame. Because they are really nice looking cards to add to your collection, whether you are a player or set collector.

Currently, there is an effort to complete a checklist for the three store exclusive insert sets. For those who plan on searching for these cards, you can find an updated checklist here. And if you do find these cards but don't want them, contact the members who are updating the checklists. They want them and are helping the effort to compile the checklists for others who may want to start or complete their sets. If there was ever a time to get into online trading, this is it. Thanks.