It seems that from the moment the season ends to the beginning of spring training, one of the biggest news stories in the off-season is who is coming over from the Pacific to play baseball in the US. Japan and Korea are two countries who have embraced the National Pasttime and have been playing for many decades. Japan, especially, has been enamored with the game going back to the Babe Ruth era. And since then, they have established their own brand of baseball that as a gaijin (foreigner in Japanese) is incredibly unique. From the organized cheering sections to the presents given whenever a player hits a home run, things you don't normally see in the US are common in the Japanese game.

On September 1, 1964, Masanori Murakami became the first Japanese born player to make his major league debut when the San Francisco Giants called in him to pitch in the eighth inning against the New York Mets at Shea Stadium. He pitched a scoreless inning, and was not scored upon in his first eleven innings of work. He quickly became a hero to the Japanese community in San Francisco and a cultural icon back in Japan. He pitched in 45 more games the following year, with a 4-1 record, 8 saves and a 3.75 ERA. He returned to Japan after the 1965 season, and continued his career in the Nippon Pro Baseball league.

Thirty years later, a "Tornado" landed in Los Angeles. Hideo Nomo, after a five year career with the Kinetsu Buffaloes, signed with the Los Angeles Dodgers. The media frenzy was incredible as both US and Japanese media stormed Dodgertown in Vero Beach, Florida, as Nomo went about his business to earn a spot on the Dodgers roster. Nomo-mania had just begun. He won the NL Rookie of the Year honors, he was named the starting pitcher for the NL in the All-Star game, and finished the year with 13-6 record, with a 2.54 ERA and 236 strikeouts. If anything else, he opened the floodgates for the influx of players from Japan and Korea that have come since. 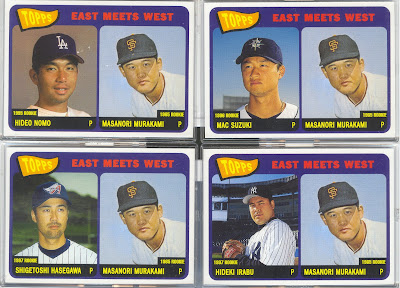 Inserted in 2002 Topps Series I baseball (1:24 regular hobby/retail packs) was an eight-card set called 2002 Topps East Meets West. This set was created to honor those players who have come from Japan to play in the United States. The set uses the 1965 Topps card design and each card includes a picture of Murakami paired with eight current (as of 2002) Japanese ballplayers. While for the 1965 Topps set, Murakami was joined by Dick Estelle on the rookie card, this time, he was joined by:


The backs of each card features the minor league statistics of both Masanori Murakami and the featured player, again in the design of the 1965 Topps cards. The most notable exclusion in this set is Ichiro Suzuki, whose arrival (along with Shinjo) made the arrival of Japanese position players possible. Others who made their big league debut prior to 2002 who did not appear in this set include Takashi Kashiwada, and Masao Kida. And since 2002, 24 other players from the Land of the Rising Sun have made their big league debut. There have also been 12 players from South Korea, and 5 from Taiwan.

A very inexpensive set, it will be found on eBay every once in a while. A good insert set to complement your 2002 Topps Baseball set. Honoring the pioneers of baseball who have paved the way for today's stars like Daisuke Matsuzaka, Hideki Okajima, Tadahito Iguchi, and Kosuke Fukudome, Topps did a good job with this one. 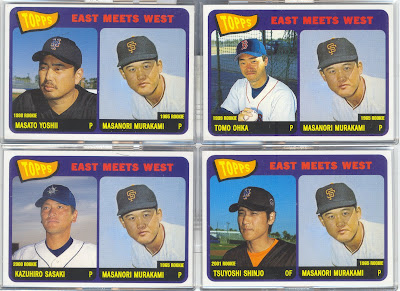