Quotes of the Week: Cal Ripken, Jr. and Roberto Hernandez 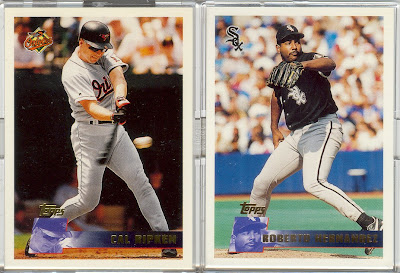 Would Roberto Hernandez be the man that ends Cal Ripken's historic consecutive games played streak??? At the All-Star Game???

Sorry I’m late with the Quotes of the Week. I knew what I wanted to write about, I just had to find the right quotes and reference the sources.

The QOTW flashes back to the 1996 All-Star Game, and features Hall of Famer Cal Ripken, Jr. and the infamous American League Team Photo Shoot that took place before the game in Pittsburgh. Now this has been covered many times over the years, especially after Cal ended his historic consecutive games streak. But most of the stories covered Cal’s side of the story. Few mentioned how the other guy felt about what happened on that fateful day.

So the story goes that after the group photo was taken, and the players began to depart, Roberto Hernandez, closer for the Chicago White Sox, began to slip off the platform. If you’ve ever tried to stop yourself from slipping, whether it’s on ice or on a banana peel, you’d flail your arms around trying to regain your balance right? Well, that’s exactly what Mr. Hernandez did, and in the process slammed his forearm right into the Iron Man’s face, breaking his nose.

Although bloody and broken, Ripken somehow was able to get his nose reset (it had been broken before apparently). And after taking batting practice the day of the game, declared himself able to play. He started the game, playing seven innings in an AL defeat.

Looking forward to the game, realizing what could have happened had he NOT been able to play, Ripken told reporters,

"The last thing you want to do is go down in the history of All-Star Game competition as the only injury sustained during the team picture."

Seeing Ripken on the field was a huge relief to “Boom Boom Bobby.” As he recalled after the shoot,

"I hope it doesn't end his streak or I'm dead."

Ripken is now happily retired and in the Hall of Fame. Hernandez last played in the majors in 2007, splitting time with the Indians and Dodgers. But for one moment that both played as teammates that fateful week in 1996, even though the AL did lose the game, the happiest man at the game was Roberto Hernandez.

"I knew that if it ended the streak, I'd be dead."