Back in 2002, I noticed something very disturbing in my Beckett Baseball magazine. You see, up until then, every relevant set that Topps produced (base and traded) appeared within its pages, with at least five to ten cards below the set name. On this particular day, I was actually looking up each of the forty-five cards that were reprinted into the 2001 Topps Traded and Rookies set. The 1974 set was there, so was the 76. The 1981 set followed, and obviously the 1982 Traded set had to be there. There was 1983, and then 1984. I saw 1986, and 1987...and then I thought,

Did Beckett finally run out of room with all the new releases to include this set? I mean, I know that there was an influx of new sets, and that the older sets were becoming less and less relevant, but to completely take a Topps set off the monthly price guide? Now to be fair, they started clearing out the mid 80's efforts of Donruss, Fleer, and Score, and there were not that many regular Upper Deck cards listed within the magazine as well. But to see a Topps set missing? That's when you know that they were beginning to run out of room.

What was it about the 1985 Topps Traded set that made it expendable??? Was it devoid of key rookie cards? Was it because of the design, similar to the 1985 design, but an even brighter green used for the back of the card? Was it because of the lack of star players that were included in the set? Was it because the price of the common cards stabilized? What made this set irrelevant to Beckett? Until Beckett coughs up the answers to this mystery, all we can do is theorize, look back at that 132 card set, and see if we could figure it out for ourselves.

In it's fifth year of true existance as a product sold exclusively at hobby stores, the 1985 set was thrust upon the collecting public at the end of the 1985 baseball season. Dwight Gooden, the twenty-year old fireballer for the Mets won the pitching triple crown. Pete Rose broke Ty Cobb's all-time hits record as a player-manager for the Reds. Nolan Ryan struck out his 4,000 batter. Don Mattingly and Willie McGee won the AL and NL batting titles respectively. The Royals and Cardinals played seven games to decide a World Series Champion, with KC shutting down the fleet-footed Cards 11-0 in that pivotal game 7. If you wanted Rickey Henderson's first Topps Yankees card (after being traded from the A's), or Howard Johnson's first Topps Mets card (traded by the World Champion Tigers in the 1984 off-season), or cards heralding the return of Billy Martin and Earl Weaver to the managerial ranks, then this was the set for you.

And how about the rookie cards that were part of the set. Because Topps at the time continued the practice of keeping new players off the flagship set, both 1985 AL and NL Rookies of the Year, Ozzie Smith of the White Sox and Vince Coleman of the Cardinals, made their Topps debut with rookie cards in this set (or as Beckett calls them, XRC's). So did Tom Browning, Mickey Tettleton, Teddy Higuera, Mariano Duncan, Daryl Boston, and Joe Orsulak among others. Okay, so Duncan, Boston, and Orsulak don't have the hobby love that Bonds, Jackson, and Canseco would get the following year, but that's who the company saved for their update set.

Along with the aforementioned Henderson, and HoJo, Gary Carter's first Topps card as a Met, and Jack Clark's first Topps appearance in a Cardinal's uniform are in this set. Oscar Gamble, who ten years prior showed the world how cool an afro looked under a Yankees cap, looks like he let his hair down with the White Sox. Oddibe McDowell, who did appear in the regular 1985 set as part of the US Olympic team, has a card here with the Rangers, making the jump to the big club without setting foot in the minors. 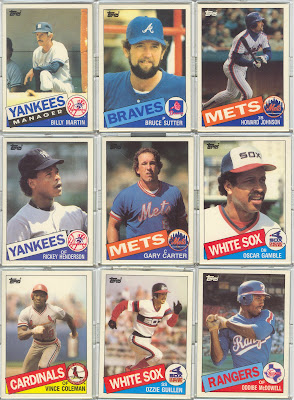 The pictures used for the cards were your typical 80's fare, a combination of action shots and head shots (although there was a lot more of the latter). There was a lot of picture space, above the rectangle and team logo that filled the bottom of the cards. The logos that appeared in the circle look real nice, and just like those 1987 Topps cards that introduced me to the Hobby, I would have cut them out of each card if I was 8 or 9 years old.

Although there is a lack of star power to this set (okay, that's an understatement), and it has little to no demand (the big book says that a complete set is not even worth the price of shipping it across the country), it was still a shock not to see it included. In recent years, Topps did bring it back (it must have made room it after taking out almost half of the other brands' sets from the price guide...like anyone was going to miss them), but only the rookie cards were listed, and even then, it would only be Guillen and Coleman who would have prices next to their names.

So maybe it was a combination of everything I asked earlier that made it easy on Beckett staffers to remove the set from the regular guide at that time. Heck, nobody talks about this set unless they are either missing cards from it, or they're looking for a cheap set on the Bay. I may have typed more words about this set in the last fifteen minutes than the entire Hobby blogosphere put together. But it's still a set, and a much needed supplement to the 1985 Topps set. Complete Factory "sealed" sets of 1985 Topps were being sold for the first time (albeit in limited numbers). And even in 1998, as the price of the McGwire rookie card caused complete sets of 1985 Topps to escalate in value, you'd think that would have rubbed off on it's traded sibling. But alas, it did not.

So here's to you, 1985 Topps Traded. Although you have been forgotten by most in the Hobby world, know that you are still worthy of mention here as the Set of the Week.

Awesome set! I started collecting in 1983. I put together my first complete set in 1984. I have 2 or 3 1985 sets. I did all of this by buying cards from the corner pharmacy. In late 1985 I went to my first hobby store and there on a shelf, was that purple "Traded" box. After begging my mom, I had that set. After explaining to my mom that these sets were not at any of the stores we went to, she went back and picked up the 1984 brown "Traded" set box that I got for Christmas. I love those little boxes. Still looking for a cheap 82 set...

I seemed to recall Topps experimented with Traded "Packs" of theses cards...and somewhere I have a wrapper.....anybody else???