During the course of a 162 game season, there are plenty of opportunities for two teams to get together, take time out from the game, and just beat each other senseless. And I'm not referring to one team scoring more runs than the other. Nothing beats (literally) fun at the old ball park than watching a knock down, drag out, good old fashioned bench clearing brawl.

Seen at least once in every hockey game across North America, when two baseball teams decide "it's time to play the fued" as Rich Eisen once said to describe a BCB, it makes headlines. From the Michael Barrett/AJ Pierzynski brawl of 2006, to the intense playoff battles between the Yankees and Red Sox, when two individuals from opposing teams decide to take their frustrations out on each other, it makes for great theatre, the game that we call baseball. 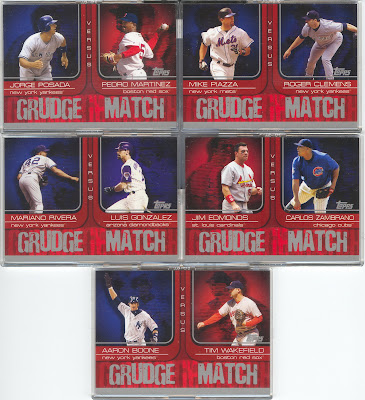 Inserted into packs of 2005 Topps Series I baseball (1:24 hobby, 1:18 retail packs) were 10 cards from a set called 2005 Topps Grudge Match. Horizontally formatted, with a red and gray color scheme that could only help establish the mood of the set, each card featured two players from opposing teams that have thrown kerosene into the fire that is known as their rivalries with the word "VERSUS" seperating the two combatants:

If you haven't noticed, most of these "matches" involve the New York Yankees (five cards, with Clemens featured twice) and the Boston Red Sox (three cards, all vs. the Bombers). The backs of each card set up the situation that eventually lead to the "Grudge Match", whether it be the already mentioned 2003 ALCS (Posada vs. Martinez), the 2000 World Series (Piazza vs. Clemens), Game 4 of the 2004 ALCS (A-Rod vs. Arroyo), or even a regular season game (Edmonds vs. Zambrano, Tucker vs. Gagne). And yes, in about half of the cards, a bench clearing brawl is mentioned in the story.

The only card that doesn't belong in this set is probably the last card, featuring Miller and Sosa. Now, we all know what happened to Sammy in that one game in 2003, but did Topps really have to bring up the fact that the nickname of Reds BACKUP CATCHER Abraham Philip Miller is "Corky"??? I don't think that Sosa cared much about that little factoid. Besides, by the time this card was printed, he was already shown the door in Chicago, leading to a lackluster year with the Baltimore Orioles.

Looking back, it's funny to think of what has happened to each pair since the date of infamy described on each card. For example, Zambrano and Edmonds are now teammates. Has anyone on the team brought up that game on July 19, 2004??? And although they tried to put a positive spin on it, I'm sure Piazza had revenge on his mind when he had to catch for Clemens during the 2004 All-Star Game. 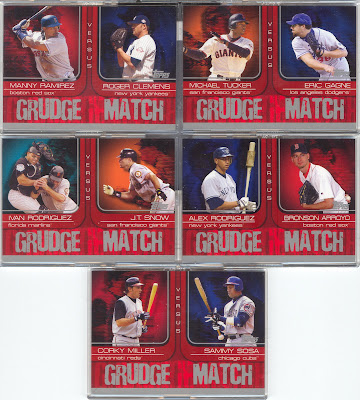 At ten cards, it's a fairly easy set to complete if you open two full boxes of packs.

Not at all expensive, but certainly worth the price, no matter how much is spent for it. Four years after its release, they are not seen often online, whether as a full set, or for individual cards. Get your favorite cards and relive the rivalries, or get all 10 cards and add them to your 2005 Topps set. Can't go wrong either way.

Cool set. I have the Manny/Clemens one here. If they ever brought this set back, they could probably fill half the checklist with "Carlos Zambrano vs. (random teammate)" LOL.

As a Reds fan I got the Sammy vs. Corky. Only because I am a Reds fan.