Okay, Father's Day has come and gone, and after going over a couple of Father's day blogs, it seems the number one dad-son combo used in every instance was the Ken Griffeys (Sr. and Jr.). I even used their 1991 cards to honor them (they were teammates the year before). There really is nothing wrong with that as it does not get any classier than the Griffeys.

Then it hits me that Topps did a subset, not once, but twice, about fathers and sons who played in the majors. In 1976, Topps included a five card subset honoring the Bells (Gus/Buddy), the Boones (Ray/Bob), the Joe Colemans (Sr/Jr), the Hegans (Jim/Mike), and the Roy Smalleys (Sr/Jr). 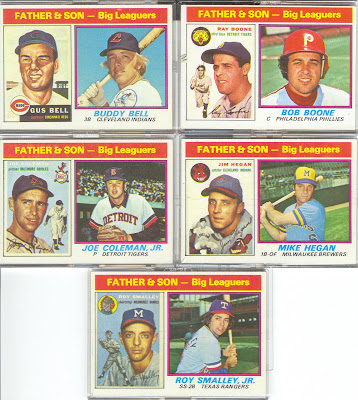 1976 Topps Father And Sons Subsets. The backs of the cards were written by each of the sons.

In 1985, they brought back the Dad/Son theme, this time with a thirteen-card subset, bringing back the Bells and the Boones, and adding the Berras, the Franconas, the Schofields, the Laws, the Kennedys, the Kunkels, the Smalleys, the Trouts, the Virgils, the Stenhouses, and the Skinners. Heck, even 1989 Bowman had a subset, pairing the aformentioned Griffeys with the Cal Ripkens (Sr/Jr), the Stottlemyers (Mel Sr/Jr & Todd), and the Alomars (Sandy Sr/Jr, and Roberto). 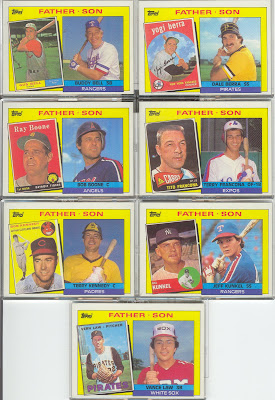 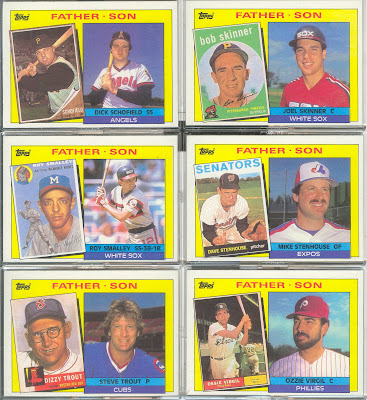 1985 Topps Father & Son Subset Cards. The Bells and the Boones are back, and they brought friends!!!

If Topps were to do a subset today with a Father & Son theme (and why not), they could add the Fielders (Cecil/Prince), the Bonds (Bobby/Barry), more Boones (Bob/Bret & Aaron), more Bells (Buddy/David), the Alous (Felipe/Moises), the Hundleys (Randy/Todd), the Gwynns (Tony Sr/Jr), Matthews (Gary Sr/Jr), and so forth to the growing list.

Scans will be forthcoming. I'm starting to get the hang of this blogging thing, and I have a lot of ideas. I just wish I thought of this sooner.

Email ThisBlogThis!Share to TwitterShare to FacebookShare to Pinterest
Labels: 1976, 1985, topps

I was thinking of Pete Rose, Tony Gwynn, and Nick Swisher. I then came across this page...