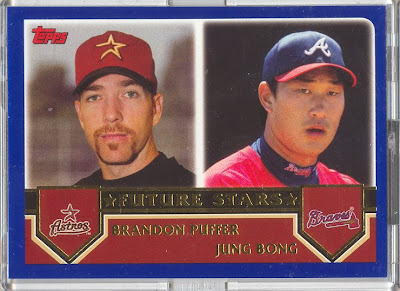 The 2003 design of Topps Baseball is known for those bold blue borders during Topps "different-colored borders" phase. Don't get me wrong, the blue borders were nice, and when paired with the right team (ie. Cubs, Blue Jays, Royals, Dodgers), the cards were absolutely perfect. As in previous years, they included a subset of future stars, players who were to make an impact if not in 2003, but later.
And in almost all cases, teammates were paired together. In Series I, teammates Marlon Byrd and Jorge Padilla (Phillies), Chris Snelling and Shin-Soo Choo (Mariners), Hank Blalock and Mark Teixeira (Rangers), Josh Hamilton and Carl Crawford (Devil Rays), Orlando Hudson and Josh Phelps (Blue Jays), Jack Cust and Rene Reyes (Rockies), Angel Berroa and Alexis Gomez (Royals), Michael Cuddyer and Michael Restovich (Twins), and Juan Rivera and Marcus Thames (Yankees) were paired together as Future Stars. In a few cases, some players did become stars (Teixeira, Crawford, Hudson, Berroa). Some are now playing for different teams and have had relative success. But the last card in this subset, #331, has bothered me for quite some time.
In what I'm sure was done on purpose (the biggest understatment ever) was the pairing of Houston Astros pitcher Brandon Puffer and Atlanta Braves pitcher Jung Bong on a card. Topps must have been very high on ensuring that these two guys end up on a card together, literally. They're not teammates, and their stats (as of 2002) do not stand out as "future star worthy." So what was Topps thinking when they created this card???
Here are the stats on each player (as of 2002, found on the back of the card). Click on his name to see how he did in the majors:
Brandon Puffer: Nine years in the minors, 259 games pitched, started 8 of them. 17-20 W-L record, ERA 3.26, 373 K's, 62 saves.
Jung Bong: Five years in the minors, 119 games pitched, started 100 of them. 37-31 W-L record, ERA 3.28, 535 K's, 3 saves.

Neither man is currently in the majors. Bong lasted three years in the majors, and was last in the minors in 2006. Puffer was in the majors for four years, and is currently with the Frisco Roughriders in the Texas League. This would be Puffer's only card in the eponymous set. Bong would have one other card in 2004.

I know many adults in the Hobby who've had a good laugh at the expense of this card. But can you imagine what it had to be like for kids just finishing up the D.A.R.E. program who needed this card? How would they ask for it?
Over the years, Topps has been known for including pictures of ball players with their zippers down (not once, but Claude Raymond had this happen to him TWICE!!!), or including pictures of pitchers pretending to throw only to have the ball secured in his glove, or even airbrushing people out of the way so the focus of the card would solely be on the player (1957 Mantle is a good example of this). But never in recent history has the Topps Company purposely paired up a couple of players for a laugh. Even Keith Olbermann, collector extraordinaire, said of the efforts in making this card,
"You got it - - it's the 'Bong-Puffer' card. Unclear if its publication will cause Topps' reputation to take a hit."
Maybe it was a just an inside prank that was in the original design stage but then they forgot to delete it before making the sheets. Maybe the copy editors said it was too late to remove after discovering the card from the final run. Who really knows? But in late 2002 - early 2003, the question on every collector's mind when seeing this card was:
"Topps, what were you thinking??!"
Sincerely,
JayBee Anama
Posted by James B. Anama at 12:07 AM

Email ThisBlogThis!Share to TwitterShare to FacebookShare to Pinterest
Labels: 2003, topps, WHAT?