Topps Set of the Week: 1999 Topps Traded and Rookies

After a three year hiatus, Topps brought back their Traded set into production. Now called 1999 Topps Traded and Rookies, this 121-card set was once again sold in complete set form only (in 1995, the cards were sold in packs, no factory complete sets were produced). And instead of sequencing the players in alphabetical order by last name (like they did from 1981-1992), or in a blatant random pattern (1993-1995), the players were seeded in this order:

Every complete factory set included one autographed rookie card. Just like the 1999 Topps set, the cards had gold borders, surrounding very large pictures (for a baseball card set with borders, these were pretty big pictures. The player's name is printed in gold foil near the edge of either side of the card and does not obstruct the player's picture at all. The backs of the cards are horizontally based, with a second picture of the player on the left with his statistics/bio taking up the rest of the space. 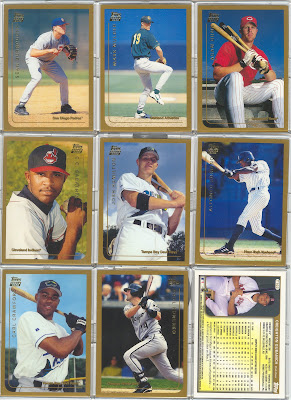 Most of the rookies in the set are now some of the more recognizable names in baseball. Players like Alfonso Soriano, Adam Dunn, C. C. Sabathia, Carl Crawford, Sean Burroughs, A. J. Burnett, Corey Patterson, and Mark Mulder all have rookie cards in this set, while veteran players such as Paul Konerko, Jose Canseco, Albert Belle, Brian Giles, Tony Batista, and Mo Vaughn made their first card appearance with their new teams.

This set also includes the rookie card of one of the feel good stories early in the 2008 season, Josh Hamilton. His return to the game after years of substance abuse and other demons, has reignited interest in his rookie cards. And this set had it. His comeback began with the Cincinnati Reds in 2006, after being selected by the Chicago Cubs in the Rule V draft and then subsequently traded to the Redlegs moments later. After a year that saw the potential that he flashed when he was first drafted, but unfortunately no room to play, the Reds traded him to the Texas Rangers, where he has since exploded. In 62 games so far this season, he has hit 147 home runs (he hit 19 in 90 games with the Reds), driven in 68 runs (47 rbi's the year before), and is sports a .322 batting average. Fans have eaten up this kid's story, as he has now surged into second place in the AL outfield All-Star voting.

Unopened sets are getting increasingly harder and harder to find as the rookies of 1999 have become the stars of today. But the set itself is still reasonably priced. Get them if you can find them. It makes a nice addition and closes out the 1999 baseball card season rather nicely.