Some Wishes to All Dads on Father's Day...

I've been a father for a little more than eight years now. I have seen both my children grow up from these little tiny babies to toddlers to full grown grade schoolers. Both my children are now showing interest in their own little hobbies, whether it be books, dolls, toy cars, Littlest Pet Shop animals, etc. I'd like to think that I've had something to do with their desire to collect things.

Both of my kids have been exposed to my little hobby since they came home from the hospital. I don't know how many of my commons have been torn to shreds by the both of them when they were each just a few months old. They've both been to many different card shops and shows, waiting ever so patiently as daddy had to get that one card to complete a set or had to buy supplies. The store owners or the people at the shows always smiled when they saw me bring my children, and they have received tons of free cards from them over the years.

My daughter, the eight-year old, has taken an interest in baseball herself. She loves the Cubs, and she's become a big fan of Derrek Lee. She asked me if I had his cards, because she was doing a school report on him (one of the last assignments of the year). I said I did, but she couldn't bring them to school. I offered to make her a photo scrapbook with the cards so she had something to display (and probably to show her classmates that her dad was a geek...but whatever) with her report. She did rather well I'd say, got an A and everything.

My son is only five, still oblivious to his dad's hobby, even though he's been exposed to it as well. He does show some of his dad's collecting habits. Has a good collection of books that are spread everywhere in his room (everywhere except his bookshelves...). He is still learning how to read, but at least shows keen interest in reading.

I look at my kids, and worry about how best to provide for them. And I think back to how my dad raised me and my siblings. He did so much when it came to raising us, even though he worked long hours at whatever job he had (everything from a gas station attendant to owning a bakery). He was strict, but not a total disciplinarian. He understood that each of his kids were unique, and needed to be raised differently from each other, because what might have worked for me, may not have necessarily worked for my brother and sisters, and vice versa. And somehow he made it look easy, even though to us kids he had no idea what he was doing half the time (typical teen angst opinion I guess). My dad truly did a lot for me personally, and I'd like to think that my parenting abilities are similar to his. And I thank him for that. I will admit that I am not a perfect dad, but I will never stop trying to be one.

My wish to all fathers out there is to continue showing the love and caring that you do to your kids. They truly need you in their lives, even though they won't admit it. Show an interest in what they like and what they don't like. Teach them to love themselves and others around them. Teach them to behave like adults, but remember to let them still be kids. Be there for them, regardless if they want to share their problems with you or not. Because they eventually will, you will never have to force them to do it. And even if they don't, at least be a good listener, and show that you truly are concerned. Learn from your kids. They will teach you just as much as you want to teach them.

And finally, to Dads Everywhere:

Your children love you, even more than you love them. Why??? Because you've loved them for only a little while. Your children have loved you all their lives.

So be a good dad. Go out there and spend some time with your kids. You don't need to be reading anything else I have to say today. This is your time to be with them. So turn off the computer, and have fun with the kids. I'll be here on Monday when you get back. 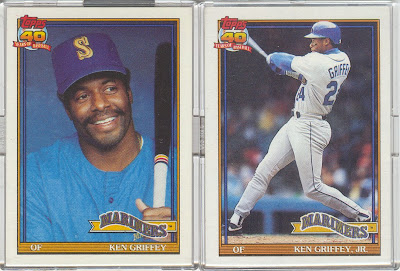 P.S. Okay, I know that this is a baseball card blog. And it's Father's Day. So what better way to end the post than to include the first father & son to become teammates in Major League History. jba

Email ThisBlogThis!Share to TwitterShare to FacebookShare to Pinterest
Labels: 1991, topps