What's Wrong with Having "Gimmicks" in a Topps Set??? 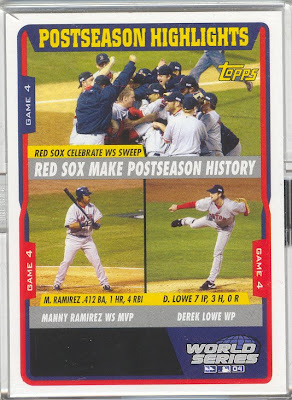 2005 Topps #368: Red Sox Postseason Highlights Game 4 World Series. Is this the card that started the SP gimmick madness???
Here is the problem I have with everyone griping about the now infamous 2008 Topps II SP Six. Almost every blogger that I have read had not so nice things to say about them. To further validate their point, they add quotes from other bloggers or message board posters that agree with their position. Things like:

Well, for all of you not buying the product, thanks. You just made it easier for me to find these cards. Less competition, the better I say.

What you guys fail to realize is that not all the cards are part of the base set.

The 3 WBC cards (Fukudome, Ramirez, Yabuta) are an insert set all on its own. They are unnumbered, and although they are designed similarly to the base set, they are not part of it. So stop whining about them and treat them like the insert cards they are. Besides, we will most likely see their real Topps Rookie Cards in the Updated and Highlights set.

The Gore card should be treated like an addition to the Presidential Candidates card insert set from series I (as they use letters in place of numbers to label the card). The Arnold Card is a true gimmick as there is really no place to put it (just like the Uzuki card).

This leaves us with the only SP card from the set being the Santana #661 card. This will be the only true SP in the entire basic eponymous set. And who’s to say that it won’t show up in the factory sets en masse. Remember the 2007 Topps Barry Bonds card???

Now Stale Gum listed all the “gimmick” cards that Topps released to the masses in the last few years:

If you recall, 2005 Topps series 1 had 367 cards on the checklist. Then, after the case breakers sorted through all the cards, they realized that not only did a card #368 exist, but it was not in every box they opened. They were supposedly packed into one of every four-five boxes. The cards began selling for ridiculous prices because set builders had to have the card. The words “rare” and “SP” were used in every auction for this card. There was no mass hysteria (probably because there were no bloggers back then to cry foul) like there was now. And then what happened? Every factory set had a card #368 in them.

Maybe that’s why nobody talks about #368 in broad detail like they do with the above list. It’s a shame that nobody is giving credit to the card that started the SP madness that is now part of our daily lives as collectors in the Hobby.

Maybe I’m naïve, but I have to wonder, “Why be angry about SP’s people?” Be happy that Topps is putting the word “chase” back in “chase card”. Find them when you can, and buy them at the fairest price possible (not this $399.99 garbage that some on the Bay are charging). I know I will. With all of you people quitting/boycotting/no longer buying Topps cards because of this, it will make the hunt even more enjoyable for me.

Email ThisBlogThis!Share to TwitterShare to FacebookShare to Pinterest
Labels: 2005, 2008, topps

Very true JayBee. Excellent post. The only "gimmick" card I own is the Jeter/Mantle/Bush and I sold mine when it first came out for $60 and then bought one for $10 when the hype died down. It'll be the same with all these other cards if people would just wait they'll get them eventually and besides Topps in generating interest in their product and getting people to open packs. Sounds like a win-win to me.