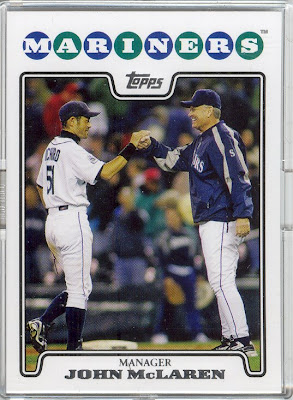 Ichiro Suzuki and manager John McLaren in happier times last year. What do they think of the team so far in 2008???We have two quotes this week, and both come all the way from Seattle.

I’m not going to pick on the Seattle Mariners. They’ve going through a very trying year so far, and even with a lineup that looks intimidating on paper (Richie Sexson, Jose Vidro, Raul Ibañez, and some guy named Ichiro) and a couple of guys pitching staff that has wicked stuff (Eric Bedard, Felix Hernandez, J. J. Putz), they are just not winning. This week’s quote comes from the M’s biggest star, Ichiro Suzuki (and you thought I couldn’t find a good quote from anyone outside of New York).

Okay, so the M’s are having it tough this year, and no one hates to lose more than Ichiro. Remember, in his rookie season, the Mariners won 116 games. But that was seven years ago. This team has the arms, the bats, and the gloves, and was supposed to be the team either to either chase or displace the Los Angeles Angels of Anaheim for first place in the AL West. Well, so far that has not happened. And nobody is more frustrated than their leadoff hitter. Having an “off” year himself, when asked about what he thought of the team’s performance so far in the first two months of the season, Ichiro responded this way:

"Playing with this team and seeing what is happening around here, I see something beginning to fall apart. If I was objectively watching this team and what's been happening, I'd be drinking a lot of beer and booing."
And what kind of beer does he like to drink?

"I usually like Japanese beer, but after this, I wouldn't care if it was from Japan or from Papua New Guinea."

Okay, whether it’s Sapporo, Kirin, or SP Lager (the number one beer in Papua New Guinea), at least he’s being honest. And like most M’s fans, he’s willing to drown his sorrows in a good honest beer.

The next quote is from M's manager John McLaren. And hey, it has the words 'baseball cards' in it. So it had to be included this week since we're talking Seattle baseball.

So, when asked about his underachieving lineup?:

"If we can just get back to what our baseball cards say, we're going to be fine. The cards tell us what we can do, but in a lot of cases, we're not even close. I'm not talking about career years. I'm just talking about things we've done year in and year out."
He may have a point. Check out the averages:


There are still four months of baseball left to be played, and there is still time for this team to turn it around. Best of luck Mariner fans, keep the faith. But then again,

"If I was objectively watching this team and what's been happening, I'd be drinking a lot of beer and booing."
Sincerely,