Here are three cards of Royals Manager Tony Peña from 2002 Topps Traded, 2003 Topps, and 2004 Topps. All those wondering what was Topps thinking when they made these cards, please raise your hands???
It's three-for-one today on the What??! of the week. Today, we discuss the hobby impact of (or the lack thereof) the Kansas City Royals.
Now it's bad enough that nobody showed up for team picture day when Topps was in town FOR TWO YEARS IN A ROW (which explains why the Royals Team card only showed the beautiful outfield fascade of Kauffman Stadium). But for three consecutive years (2002, 2003, and 2004), it seemed that nobody in the Topps company even cared about the team's manager to get an updated picture of the guy.
Now, it's been widely known that Topps used the same pictures of certain players when they first started in the sports card business. Film was expensive, and these guys aren't going to look older anytime soon (case in point, Ernie Banks, Hank Aaron 1954 Topps...they used the same headshot in 1955 AND 1956). Or even when they do get older, what difference does a year make (1968 and 1969 Mickey Mantle), they look the same.
But we're in the 21st century now. Film is cheap (especially now that digital cameras are more common, and nobody uses regular cameras anymore it seems). The Topps Company has enough photographers to take pictures of almost everybody in baseball. What possible excuse could they have for using the same picture of Tony Peña FOR THREE STRAIGHT YEARS???
Did Topps think that nobody cared for the Kansas City Royals? That the team was stuck in last place in the American League Central for so long that nobody would notice? Does anybody, other than Royals fans, notice cards with the Royals name on them from 1994 to present (okay, with the exception of the 2006 Topps Alex Gordon card)? My guess is that the answer to all three questions is a resounding Yes, Yes, and "The Royals have cards???"
Hired early into the 2002 season, Tony Peña inherited an already sinking ship. But in 2003, these same KC Royals, with the help of guys like Carlos Beltran, Angel Berroa, Mike Sweeney, Darrell May, and Mike McDougal, they finished in third place with an 83-79 record, their first winning season since 1993. Expected to contend in 2004, they responded with a league worst 58-104 record. And the Royals, even when they show flashes of brilliance at certain points during some seasons, have not been the same since.
I don't know if Peña is just surrendering here (I give up!!! Don't hit me!!!) or failing miserably to signal, "No pictures please. My family thinks I'm managing the Yankees. I don't want my family to know I'm in Kansas City!" Every year, I'd open packs, hoping for new pictures, then I'd see Peña's card and think, "Didn't they use this picture last year??!" I'd look, and sure enough...
In 2005, he was mercifully relieved of duty by Royals management. I'm sure, based on his 2005 Topps card, that he just had it with this team. 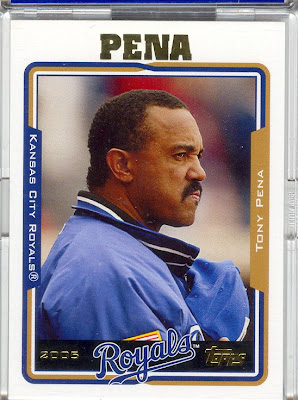 Topps could have easily found different pictures of Tony Peña to use after 2002. Or made the effort to get a cameraman out there to do it. But for three consecutive years to use the same picture in the 21st Century? It's uncalled for. The man deserved better. Not only from the Royals, but from the Topps Company. Topps, "What were you thinking??!"

Email ThisBlogThis!Share to TwitterShare to FacebookShare to Pinterest
Labels: 2002, 2003, 2004, topps, WHAT?

I've wondered the same thing for Mickey Mantle cards from Topps since 2006. Especially the Mantle collection photos that get retread in other Topps issues.