Oh Thank Heaven for 7-Eleven. And Speaking of Eleven...

As I get older, I realize that my tastes have changed. To wit...at least once or twice a week before going to work, I would stop by the local 7-11, grab a taquito (or two), a bottle of Pepsi, or (if I had the cash), a bottle of Starbucks Frappucino. Lately, I've given up the Frap habit (too expensive for such a little amount of beverage), stopped buying the bottle of Pepsi, and have found myself buying the 7-Eleven Iced Mocha. That's good stuff.

Anyway, today, not only did I get my iced caffeine fix (which is funny, because I've been getting iced coffees even when it's 10 degrees out), and $10.00 worth of gas for my car, I bought a couple of packs of 2009 Topps Updates and Highlights. You see, at the register, there is a plastic card "display" that can hold up to eight different products worth of packs. You just select the packs from the bottom (similar to the displays at the local Target) and they get refilled at the top. So I bought two packs of U & H, just to give me something to look at during my lunch hour.

Well, 1:00 pm finally arrives, and as I sit down and wait for my lunch to heat up in the microwave, I open the first of the two packs:

Wait a minute. Back up the truck! (flipping back the last four cards)... 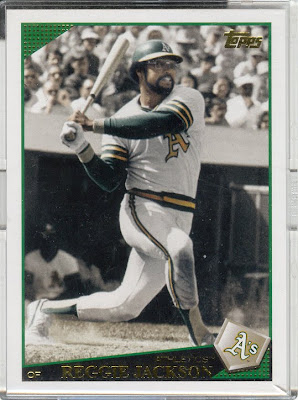 I was just telling someone via e-mail that I have the lousiest luck pulling these SP cards from packs that I buy. Either I get a card that I already received in the mail earlier (the Jim Palmer card), or I send a pack of cards to England and the guy pulls the elusive 2008 Topps Red Sox w/Giuliani RED BORDER CARD. It had gotten so bad that even one of the winners of my contest pulled a Rickey Henderson SP card from the pack I BOUGHT AND MAILED TO HIM!!! So that's why I've been begging and pleading for the SP's via trade.

But to get this card...from the 7-Eleven of all places...I'm...wow!!! Forget opening the second pack now. (I just did, about 11 hours after my lunch break. Nothing much to write about...trust me).

And that brings the total of 2009 Topps U & H SP's that I have to eleven, and fourteen to go before the set is complete. To the person who offered to send me the Jackson OAK card for trade...thanks for the offer. I don't think I need it anymore.

Email ThisBlogThis!Share to TwitterShare to FacebookShare to Pinterest
Labels: 2009, topps, U and H shortprints, updates and highlights

my 7-11 still has a dusty pile of 2006 Upper Deck football cards and topps '52 basketball cards. I think they might even be older than the hot dogs. p.s. I sent you and email offering a trade for some SPs. Read it over and lemme know whatcha got.

Congratulations JayBee! Always nice to get a card you need from a retail pack!

It's always better to have a nice pull from a pack rather than get one in a trade or buying.

Nice. Maybe you should have picked up a lottery ticket too.