So What Does This Mean for NHL Puck Attax???

Well, the news of the day is that Panini has now been granted a license by both the NHL and the NHLPA to produce NHL Hockey cards starting next season, currently sharing the market with UD (which, if the rumors are true could be losing something more damaging...further spiraling the company to the brink of oblivion...but let's wait and see shall we?).

It makes sense...again...that Panini enters the market. They are an internationally recognized brand name, and many of the players in the NHL are based in Europe, where Panini's name is as recognized there as Topps' is here in North America.

But Topps put out a product that was licensed by both the NHL and NHLPA this year...Topps Puck Attax. And although it is more of a trading card "GAME" product than it is a trading card product, the product used players' names, teams' names, logos, and all the bells and whistles. And from the few packs that I received (a prize from VOTC's contest a while back), the cards look fantastic (although hard to store). 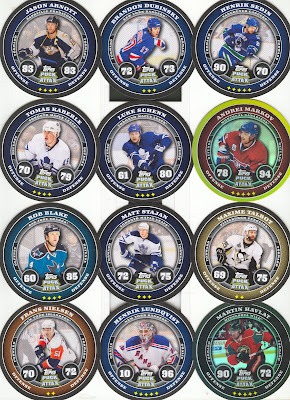 Does this mean that Topps blew their shot at regaining a license? Will they even be allowed to make Puck Attax again?

With the recent troubles at that other card company, will the NHL reconsider?

Although I don't really collect hockey cards, I certainly would love it if Topps got back into the NHL card business again, something they've been away from since the strike cancelled the season. And I thought that with Puck Attax, the door was slowly opening for a shot (pun intended) at it.

Sadly, it doesn't appear that way (unless something happens).

JayBee Anama
Posted by James B. Anama at 3:12 PM

That Panini was given a licence over ITG is a very sad day in the hockey community. Panini has shown that they do not have what it takes to produce quality cards (basketball and football)... why should anyone think that they can produce hockey?

Again, money talks, and contrary to what Topps says, the lucky ones are not the collectors. We get the shaft, again.