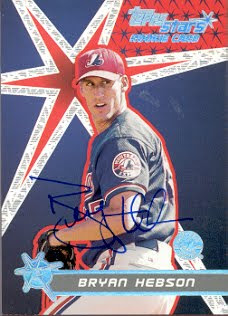 Happy Birthday Bryan Hebson!!!
Now I know what you're thinking.

Why am I wishing this guy a Happy Birthday, something I have not really done on this humble, little blog for a player?

Why am I posting a birthday greeting to a guy who only played in two games for the Montréal Expos in 2003, a career 13.50 ERA, and hasn't appeared in the majors since?

Why am I featuring a player who doesn't even have a regular Topps card to his credit? I mean, the guy only has two Topps cards (2001 Finest, Topps Stars) not including parallels (bringing his total up to five Topps cards...TOTAL!!!)?

Why am I saying Happy Birthday to this guy, when there are 59 other major leaguers who were born today, including All-Stars:
And even current big leaguers:
So why Bryan Hebson?

Because Bryan Hebson and I have one thing in common. We were both born on March 12, 1976. We both turn 34-years-old today. And while I write about baseball cards, he got to be on a couple (although not the flagship brand). And for two games, he got to step onto a big league ball-field. And unless another 34-year old rookie makes it to the big leagues in 2010, Hebson will be the only player born on March 12, 1976, to make his major league debut.

P.S. I had a tough decision to make today. Either I write a birthday greeting to Bryan or create an All-Star Team of players born on March 12. I think I'll do the All-Star Team thing next year. jba
Posted by James B. Anama at 9:00 AM

Happy Birthday -- before the day ends!

My guy is Robert Perez: and at least he played for the Yanks, but there's no cardboard proof.

What a coincidence! I am a close personal friend of Bryan's, and I can tell you that you will not find a more hilarious, kind, stand-up guy - a great guy to share a birthday with! Happy Birthday to you both!