(Please note that there is a bit of commentary below today's post. Make sure to read it before moving on. Thanks, jba).

Thanks to the Topps Card Randomizer, introducing the Random Topps Card of the Day for Saturday, March 6, 2010: 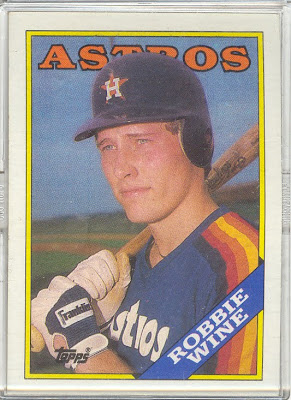 Before I continue with the preview for Retro Sunday, I just have a few things to get off my chest. Please bear with me.

I have been a Topps Collector for almost 24 years now. I have always been loyal to the Topps brand and their products, through good times (and designs) and bad (and there have been bad ones). And yes, I will admit that if the current situation happening with UD was happening to Topps, I'd be an emotional wreck.

But now that Topps, and Topps alone, has the exclusive license to produce MLB cards to the masses, I am asking...BEGGING...PLEADING...for you to add more players to the eponymous set.

I'm not talking about an extra space in the "updates and highlights" set. I'm talking the big one!!! The one you make millions of factory sets for. If you can't produce sheets of 132 cards (11 x 12) and are reduced to using 110 card sheets (10 x 11), then either add an extra 110 cards to both series (880 cards), or do something so that the base set isn't stuck on 660. There are 30 teams in the majors. With 25 players per team, that's 750 players on a roster at any given point. With roster call ups, and other injury replacements, you could have at least 800-900 guys running around big league ball fields at any give point in the 2,430 game season. It's great that even a guy like Robbie Wine was even able to get a card even if he only played in 14 games the year before. Because unless he was a New York Yankee, or even a Boston Red Sox player, a guy like him wouldn't even get a card nowadays. And that's a shame. There are a number of guys who are playing now who haven't even gotten a single Topps card to their name because you hold the line at 500 or so players per series (not including the "rookies").

You run the show now, Topps!!! Both the law, and MLB are ON YOUR SIDE!!!
You want to make your product more fan friendly??? More "kid-friendly???" Then add more players to your base set. And I don't mean your 14-15 card "blister team sets." And I don't think we need any more 55-card team sets unless you do one for ALL 30 TEAMS AND NOT JUST THE YANKEES AND RED SOX!!! (and I'm not even asking for that!!!)

Add the third-string catcher to the set. Add the mop-up reliever as well. You somehow managed to do this when you ran 792 card sets. Do it now. Just enough guys to actually fill out a roster, so that when kids sort their teams into positions, there are at least 11 to 12 pitchers, 2 to 3 catchers, 6-7 infielders, and 5-6 outfielders/dhs, and still have room for a manager card, a team leaders card, a couple of prospects, and all the other fun stuff you included in your base set not so long ago.

Sure, make room for Mantle if you want, but give a guy who might only be up 20 games TOTAL a piece of cardboard fame. And if not now, load the U & H set with everybody you missed and do this next year!!! You'll make team collectors happy. You'll make fans happy to know that everybody on their favorite team is now immortalized on a 2½ x 3½ piece of cardboard manufactured and distributed by the "Exclusive Trading Cards of Major League Baseball!" And, you'll make me happy too.

I think that is what series 3 (Update and Highlights) is doing to a certain extent I think it is catching the extra guys plus the traded players allstars etc...

Remember the rookie card logo, is giving a lot of players a card (maybe there only card in some case), I have been collecting those player and some may never have another card

I'm in the same boat, but with another decade tacked on there. I have complete Topps base sets from 1977 through 2007 -- at which point I finally threw in the towel. The teams weren't anywhere near comprehensive, so the set didn't function very well as a "let's look back at the season that was" medium. Now I just collect my team sets each year, with a little extra attention when they win it all -- like in 2009!

Yep I'm right with you JayBee, I even purchased the 2004 Topps Total set (sight unseen) because I wanted cards of all the others left out of the main set. I also hope they bring back the 792 card main set, and keep the update sets at the current 330(ish) level. I'd love to see less 'rookie cards' and more veterans. Middle relievers get nothing these days! But it's still better than the awful 1996 - 2000 years when a 440-506 card set was all we got! Another thing that has crept into the sets in the last 5 years, Series 1 has some players in their new uniforms, even before they've suited up for that team. I know it's computer-generated, but i'd rather keep those cards for Series 2 or the Update set. I'm glad they didn't screw with Jim Thome this year, and they gave him a Dodgers card. Some players never get a card with some teams, much to my dismay. Bring on Opening Day! (The day, not the set)
Nick J