It's Retro Sunday!!! Thanks to the Topps Card Randomizer, introducing the Random Topps Card of the Day for Sunday, March 28, 2010: 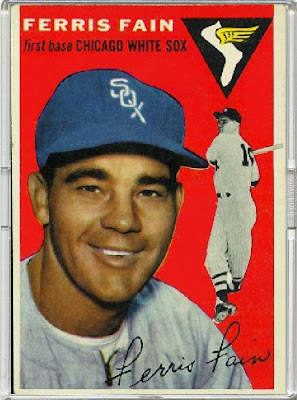 In case you're actually wondering, I don't own this card. And this time I was not able to get a crystal clean copy of the image from the Baseball Card Cyber Museum. However, thanks to Topps' new promotion, the Million Card Giveaway, and after figuring out how to find a card by it's numeric ID, I was able to snag the image you see above. For the record, the card in Topps' baseball card library is #886.

Well, it's back to normal on Monday. Tomorrow's card will be: 1990 Topps #453. Post will arrive at 1:00 PM CST. Come on back then to see what the Topps Card Randomizer gets us to look at then.

great idea. i love cards, my heyday was Topps complete sets from 87-92 as a yearly christmas present. i opened a few of them and left a few sealed.

as for your kids, it's good to know kids still like baseball cards. if they can ride their bike to get a pack of cards, all is well in the world.

my blog is not for young kids. cheers

The Baseball Card Cyber Museum does include the 1954 set.