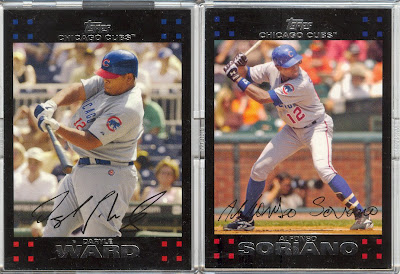 Before Topps began splitting their cards into series again (the period between 1974-1992), if a player changed teams in the off-season, he would still be pictured as a member of his old team. Which was all right because the cards always looked back at the previous year, and just because the guy left one team for another, does not mean he was a part of the team the year before. Topps back then didn't have the time to update their pictures once the cards were on the press. Collectors would have to wait for the 132 card traded sets to see if their new player made it into the update set, even though the set didn't come out until after the season was over.

If a player was traded to another team late in the season (let's say after September), even if they couldn't get a picture of said player with his new team, or if the picture they had could not be airbrushed without utterly destroying the picture (and who's to say that the airbrushing the caps on a headshot picture wasn't already uttrely destroying the picture), they would at least put the words "Traded to ..." somewhere in the picture (see 1988 Dickie Noles or 1989 Jody Davis).

Nowadays, thanks to the magic of photoshop, the Topps company can magically change the uniform of a player if he changed teams. And in many cases, you would never know that they used that magical software program. In the case of this week's What??! of the Week, we will discuss what happens when the photo editors of the Topps Company neglect to do a little more research before, during, or after making their adjustments to a players' outfit.

Both Alfonso Soriano and Daryle Ward joined the Chicago Cubs before the 2007 season. Before that, Soriano finished a 40-40 year with the Washington Nationals, and Daryle Ward was a pinch-hitting machine for both the Nats (where he was a teammate of Alfonso) and the Atlanta Braves. Before the end of 2006, both players signed as free agents to the Chicago Cubs. And now that Topps didn't have to distribute their first series of the year until February, they had time to change the uniforms of both players from Nationals and Braves to Cubs.

When both were members of the Nationals, Soriano had the #12 jersey, Ward was #31. When he left for the Braves, he was given uniform #12 (apparantly, 31 has not been used by the Braves for years, even though the number is not retired). Going into the off-season, both players appeared in 2007 Topps season one as members of the Cubs. However, the people over in photo editing failed to realize that both players would be appearing WITH THE SAME UNIFORM #12. Now not only does the photoshopping look dreadfully obvious, but now people opening packs of 2007 Topps were wondering who was the real #12? And while the #12 is rather large on Soriano, it only shows up in a little section of Ward's uniform in his picture. So it looked really bad on Ward's card.

Now, how many people look at the cards before giving the go-ahead to print the cards? Certainly, they could have looked it up to see what number Daryl was going to get (he wound up with #32). If you're going to make changes to the guy's uniform, at least figure out what number he's going to be first. I'm sure that Topps had enough time to get this right, so why did they miss this step?

As much as it would be nice for them to return to the one series format, and eliminate the photoshopping altogether, having the cards sold in series of 330 cards (or whatever number they use) gives us the collectors a shot at completing the series in one or two boxes. And it is nice to see that at least they make the effort to include players with their current teams' uniforms when they change teams. But in the case of the above two players, Topps...

"What were you thinking???"