Okay, so Stale Gum has been campaigning for Pat Burrell. Fielder's Choice has been pulling for Evan Longoria. And the guy at White Sox Cards obviously wants to see Jermaine Dye on the field.

Well, they are all good choices, and whoever wins, they are all worthy candidates, and still have a chance to go to the game (if those already chosen get hurt between now and Sunday...knock on wood). However, for my ballot, I chose David Wright, and Jose Guillen.

Because I had them on my predicted All-Star Game rosters.

Right now, Corey Hart and Longoria are winning the race. And that's fine. But I don't have a Longoria Topps card (yet), and the only Fukudome card I have is the Japan WBC card. Either way, I'm not going to have all the cards for the all-star game. 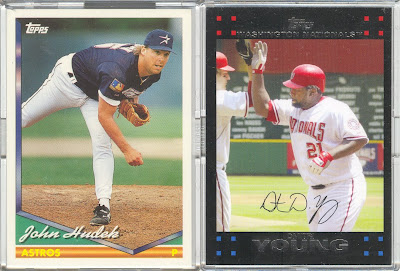 If Longoria gets voted in, it would be the second year in a row that a player on either team does not have a base card in either Topps series I or II. He would follow Dmitri Young last year, and John Hudek in 1994. Who's John Hudek??? He was a rookie relief pitcher for the Houston Astros in 1994, who became their closer that year. Up until the ASG, he compiled an 0-1 record, an ERA of 1.97, and fifteen saves. It is because of his low ERA and the fifteen saves that he was one of five Astros chosen to go to the All-Star Game. He did not have a Topps card until the end of the season, saving his rookie card debut for the Topps Traded set.

He wound up playing in nine games after the break, saved one more game, lost another game, and watched his ERA balloon to a hefty 7.36 before being shut down before the end of August that year. He finished second in the NL Rookie of the Year voting (behind Raul Mondesi) that year. He would pitch for another five years, but could not fully regain the dominating form he showed in those first couple of months that earned him a spot on the All-Star team.

Again, regardless of who goes, all ten players in the voting have the numbers that show they deserve the vote. So vote until it hurts.

Email ThisBlogThis!Share to TwitterShare to FacebookShare to Pinterest
Labels: 2008, all-star