Topps Insert Set of the Week: 2006 Topps Signers of the Declaration of Independence

In honor of the USA's birthday, it is appropriate that for this week's Insert Set of the Week, we feature the insert set that introduced those of us who are not US History majors to the 56 men who signed the Declaration of Independence.

Inserted into packs of 2006 Topps Series I baseball (1:8 hobby, 1:6 retail, 1:4 HTA) were cards that featured John Trumbull's "Declaration of Independence." Below the painting was the name of a man whose signature appears below this historic document and a small headshot of each person on the bottom right corner of the card. The back of each card is a puzzle piece, and when you get all 56 cards together, you have (hoping that all cards are reasonably centered) the actual Declaration of Independence (eight cards across by seven cards down). 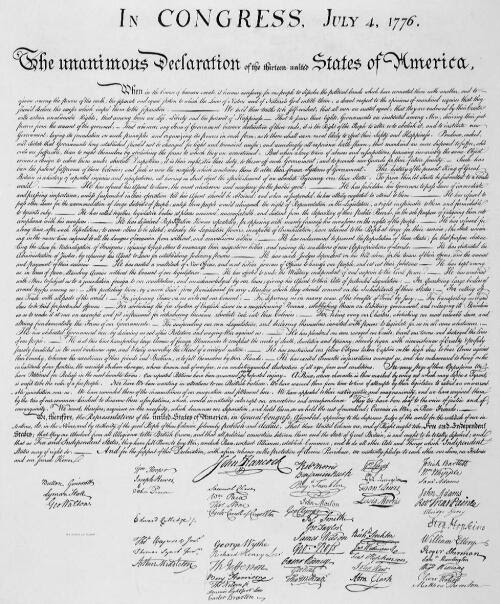 Putting all 56 cards together, you will find your very own copy of the Declaration of Independence.

Because I am not able to scan all 56 cards for the blog, here is the list of the men who are in this set, and the colonies they represented are (in alphabetical order by first name, as that is how the cards were checklisted), with links courtesy of ColonialHall.com:

Now the cards look nice, especially because they found pictures of each of the men for the set, but I wish they could have used those pictures as the main focus of the card. I mean, the painting looks nice, but it does get confusing if you don't look for the name at the bottom. It also would have been nice if they included a little snippet about each person for a bio so we would know how or why he was involved in the independence effort. Topps cards are used to remember key events in baseball history, they could have done the same with these cards on another level. And any hopes for improvement with the Signers of the US Constitution set were dashed when they used the same format for the cards as they did with the DOI set.

Many collectors balked at the idea of finding obscure historical figures among baseball players, but who was going to complain publicly that they didn't want the paper that declared freedom from Britain? It's a very elegant set, especially because of the painting used on the front of each card. And it is really nice to have a copy of the Declaration of Independence, albeit on 56 little cards. As it was the 230th year since the USA declared their independence, it was only fitting that this set be created. Yes, they could have done more with this set, but as it was, each man is now remembered and immortalized permanently on Topps cards. Sets are hard to come by, especially because of the number of cards in the set. But "commons" can be found at reasonable prices (okay, most under a buck) at shows, shops and on the internet.

So Happy Birthday USA, and many, many more.

JayBee Anama
Posted by James B. Anama at 4:48 PM