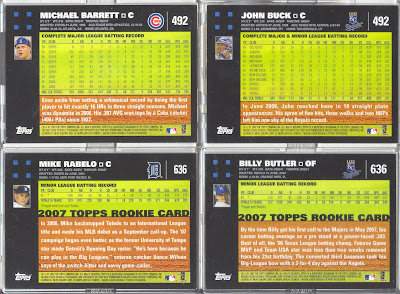 So which card is the real #492? Which player has #636? Why was there little to no warning?
I've been campaigning for a while now that Topps should increase the number of cards they put in they eponymous baseball sets. Here is another case as to why.

Our What??! of the Week returns to 2007 (again...this couldn't wait). For some reason Topps included cards of Gary Sheffield, Michael Barrett, and Mike Rabelo in packs of both series I and II:

It was bad enough that Topps left off three other players in series II because they mistakenly put these three guys back into it. So what does Topps do to correct this blunder??? Sneak the corrections into every Factory Set, and not tell anyone!!!

While they never did change the Sheffield card (he had two base cards in the factory set), they replaced Barrett on card #492 with Royals catcher John Buck, and instead of Rabelo appearing #636 in every factory set, Royals rookie Billy Butler made his RC logo debut. Confused yet??? 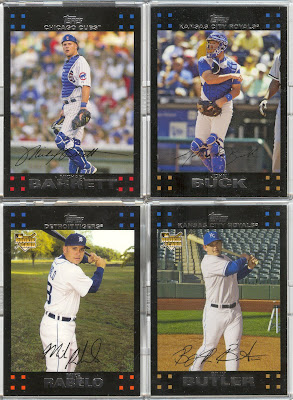 They're only Royals players. Who's going to know that Topps corrected their little blunders from the packs into their factory sets??!

Can you imagine those people who built their complete set by hand by opening pack after pack, until they got all 661 cards, only to see factory sets at the store or shop, look at the checklist that is printed on the outside of the box, and notice that there are two names that they know they don't have the cards of in their set? The only way to get the Buck and Butler cards (along with a Jeter card without Bush and Mantle) was to buy a factory set? What??? And Topps never said anything about it? What???

Because almost every hobby shop does not break factory sets, even Beckett doesn't list a price for them. There isn't even a 492a & 492b in their big price guide (nor is there a 636a & 636b for that matter). Is that because the replacement cards happened to be Kansas City Royals players and Topps again thought nobody would notice??? You'd think this would get about as much publicity as the Jacoby Ellsbury U&H card #100 SP? But because there are so many factory sets produced, and because these cards are of Royals players, nobody thought it would matter if it was never announced. Personally, I'm surprised nobody else complained about this mess up the same way they did when the Ellsbury card came out, or even when the Infamous Series II Six cards started appearing on the Bay.

So if you open your factory sets, make sure that you add both variations to your boxes and binders. And as for Topps, please tell me...

What were you thinking??!