The Last Cards Acquired Are the Ones I Remember the Most

Today, I just mailed a stack of more than a little under one hundred cards (didn't care to count) to a guy who traded three Target Exclusive insert cards. Lopsided, perhaps, but considering the number of cards in a blaster box, justifiable. And I needed to get rid of a ton of cards anyway and thought it was worth a shot. After checking off the numbers on his want list, and going through two large piles of 2008 Topps series 2 cards that were on the table, I was still one card short. That card was #596, Joba Chamberlein of the NY Yankees.

If you're a set collector, you've experienced this...

After opening pack after pack of a product, whether it be Topps or the other brands, when you don't get the satisfaction of completing a base set, it leaves both an empty feeling in your stomach, and a huge desire in your mind to find those missing cards as quickly as possible.

Now as much as I know many people are patient enough to scour through trade offers online, or at the local shop, I am not one of them. I have been known to literally run through department stores or card shops, and rummage through rack packs, hoping that the cards I need are on the top of the pack. And even after finding some, not all, SOME, I still make a mad dash to another store until I'm either tapped out of cash or run out of gas in the car.

There have been years in my life where the last card in a set haunt me. It has not happened so much in the last few years, only because I'd buy boxes and many times, I can complete a series within two boxes. Not so when I was in high school and relying on allowance to buy cards. One name still rings in my head, just as if I still had to find the darn card today: Jose Tolentino.

Now Jose only played in the MLB for one season, 1991, and only got into 44 games. Apparently, that was enough to earn Tolentino a card in the following year's 792 card set (again, 792 cards is a good number, leaves room for those third string catchers and mop up relievers that I keep harping about). Later, he wound up playing baseball with success in Japan, managed the Mexico baseball team in the WBC, and is now a Spanish Language announcer for the Los Angeles Angels of Anaheim. He even was interviewed regarding a new book exploring the steroids issue.

It got to the point during the 1992 season where I'd be screaming to the baseball card gods, "how many Jose Tolentino cards did you make???!!! And why can't I find even ONE??!" I'd search pack after pack at the supermarket (when they sold loose packs on the shelves at the store instead of a clear display under lock and key). No, not THAT way, I mean somehow being able to read through the wrapper to see the name of the player on the front of the pack. When I was down to the last 16 or so 1992 Topps cards, I was able to get the cards I needed through this method. Sometimes after opening the pack, I'd find that the top card was the only one I needed, and if I was lucky, the card behind it as well. After finding fifteen of the sixteen cards through this method, and after running out of money on many occasions, I'd wait for the day to come again that I could run around looking for that last card...in this case, it was Jose Tolentino of the Houston Astros, card #541.

I must have spent countless weekends searching for just this one card, many times coming up empty. I even bought the 1992 Topps Mini Set, just so I could see what the darn thing looked like. There was Tolentino, in his Houston Astros jersey, smiling in a headshot, as if he was mocking me, saying, "Nyah nyah na nyah nyah, you can't find me!!!" Going through pack after pack, I may have held onto a couple that had him, but because I was going by what was on top alone, I must have missed getting his card countless times. Even then, not too many card shops specialized in singles and commons, and I was to afraid drive further than about 10 miles from home because my sense of direction was terrible back then (okay, still is now, but back to the point). I did finally come upon a comic book store...THAT'S RIGHT, A COMIC BOOK STORE...that had a card shop all the way in the back of the store. They carried singles, and when the owner brought out that box of 1992 Topps commons, it was only a matter of time until... 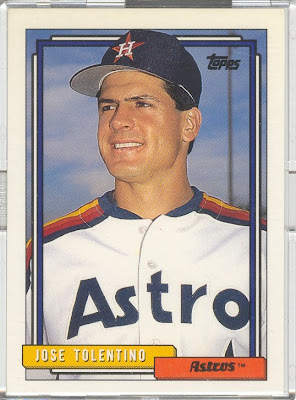 "You're mine. All mine!!!" I'd shout. I paid that $0.10, and ran out of the store, handling the card as if cradling a baby. I couldn't wait to get home, open up that binder, and put him in his place. And you know what, I'd go through all this drama again next year...okay, not so much with 1993 Topps #400 Bo Jackson the following year, but with the 1995 Topps Traded #61T Orel Hershiser a few years later (I honestly don't think I even got THAT card until the fall of 1996).

When Topps overloaded their 2007 Topps series 2 packs with too many inserts and parallels, I wound up 32 cards short of completing the set after opening one jumbo box. The following weekend, I was able to find sixteen cards at a Target using the same method of reading through the packs as I did fifteen years prior. My kids thought I was nuts. But I had a method to the madness. I found sixteen cards this way that day. I even held a contest on the Topps Message Board asking people to guess which card I would get last. It was a fun contest, and I did get a kick out of doing it. Fortunately, I have not had to go through the extremes I did since.

So to packerfan1964, your cards are in the mail. Let me know when you get them. If it turns out that I am missing something, send me a line. Thank you for inspiring me to write this post.

Email ThisBlogThis!Share to TwitterShare to FacebookShare to Pinterest
Labels: 1992, topps

The first set I completed by hand was 1984 Topps. After many packs and many trades with friends, I was down to Johnny Ray AS. I totally understand what you went through as I went NUTS trying to find this card. A friend of a friend had this card and I traded him all of my doubles (a few hundred cards - not sure how many Mattingly's) for Johnny Ray All-Star.