I have finally finished simulating the All-Star Games using my 1991 End of Year All-Star Teams. And if ever there was a time that the American League showed its dominance over the National League, 1991 was definitely the year. It was a total bloodbath as the AL not only beat the NL in all SEVEN 10,000 game series (a couple of series were won by more than 2,500 games) but the junior circuit shut out the seniors 2-0 as well.

Maybe it's because the NL only had two relief pitchers (Lee Smith and Rob Dibble). That's the only reason I see for the mismatches here as in many of the sims, Pete Harnisch, Tom Browning, and even Smiley and Morgan were used for relief.

For the official All-Star Game, I decided to just simulate one game and one game only. The starting pitchers were Morris and Glavine and I let them pitch two innings (unless they struggled badly). The rest of the pitchers would get one inning each (unless they struggled badly). The position players were replaced every three innings. No pinch hitters here, (as in previous tries, the pinch hitter is taken out of the game), and there was only one double switch.

The starting lineups, first for the American League (I'm using 1992 Topps cards because these are the cards I used to imagine my All-Star teams): 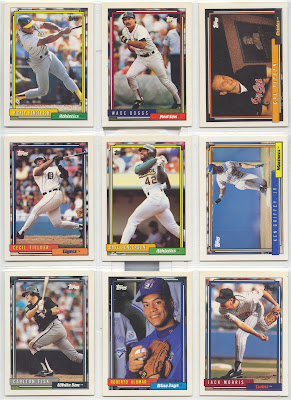 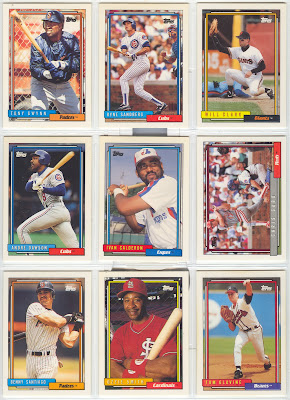 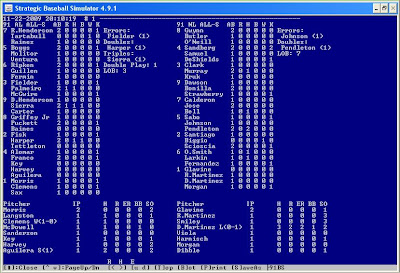 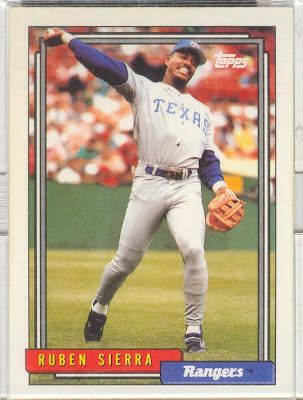 Ruben Sierra is the MVP, not only for the game-winning RBI in the fifth, but because of two great defensive plays.
If this game actually existed, the MVP would have been Ruben Sierra (1-2, 1 triple, 1 run, game winning rbi). What his line score doesn't show the two defensive plays he made in right field, including robbing Bobby Bonilla of a home run in the fourth, which could have put the NL ahead 2-0. And although the NL had men on second and third with two out, Rick Aguilera earns the first save in bdj610 All-Star Game history. Meanwhile, Roger Clemens gets the win, Dennis Martinez takes the loss, and the only players who didn't get in the game were pitchers Tom Browning & Lee Smith from the NL and Jeff Reardon & Dennis Eckersley from the AL. 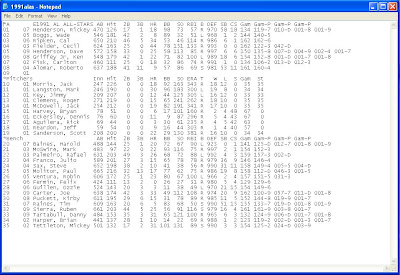 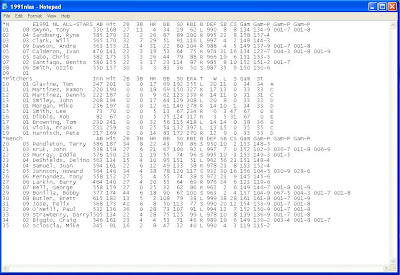 Now that the 1991 All-Star Games are officially over, on Tuesday, I will introduce the 1992 End of Year All-Star teams. Simulations for games with those rosters to come by Sunday night for a Monday morning recap.

What game are you using to play these games? Have you heard of or tried Action Sports Baseball? It is a great sim game and their Football game is amazing too.