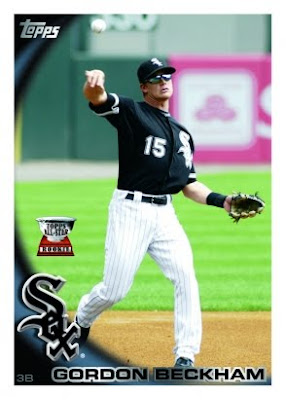 The MLB managers have spoken, and today, Topps has announced the players named to the 51st All-Star Rookie Team!!! (If the player's name is in bold, it means I predicted that they would make the team back in October).

So I guessed 7 out of 10 spots correctly (I guessed Colby Rasmus for the third outfield spot, Matt "I'm a Razor Exclusive, so I'm not with Topps" Wieters for the catcher and Andrew Bailey for the RHP). I did better last year.

That Santos pick came out of nowhere. He wasn't even a blip on MLB's rookie tracker radar. Could it be because of the Wieters exclusive with Razor and Upper Deck? Could this be why Hideki Matsui was not part of the 2003 Topps All-Star Rookie team??? Let the conspiracy theories flow!!!

So congratulations to all. Each player will now get the illustrious rookie cup trophy (pictured above) added to their 2010 Topps cards. And about that trophy. Instead of gold, it's now a silver cup, with the words "Topps All Star" on the cup, and the word "ROOKIE" on the base. Brand new decade, brand new rookie cup.

P.S. I will go over the entries this evening to see if there was a winner in my contest. To all who participated, good luck to you. jba
Posted by James B. Anama at 12:29 PM

They changed the trophy a little this year. It looks silver instead of gold. I hope they get trophies on their Topps Heritage cards as well.

You've posted the most logical explanation for Omir Santos' selection that I can think of.

Still, I'm happy to see one of my favorite Mets receive an honor (and a guaranteed spot in the 2010 Topps set.)

So they missed the Rookie of the Year in the AL entirely. The good news is that two White Sox players (last year) made the team. Thanks for the first look at the Beckham card.

As was mentioned in an earlier post. Garrett Jones could appear as a DH. Every couple of years a 10th ASR appears in the set. I think Robbie Hamrock made the team a few years back as the 10th man.,

LP is a tough one to call with Wagner, Webb, and Sabathia.

None of the series 2 cards (Reimold,Ishikawa, Santos and Getz) have trophies on their cards. Could topps be phasing them out?