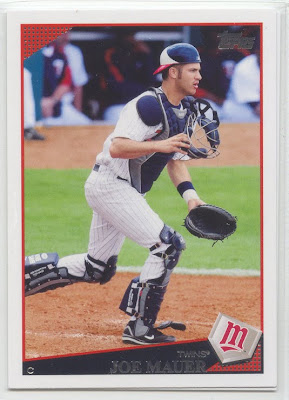 A couple of weeks ago, I mentioned that Topps reserved six cards for the AL and NL award winners that were going to be announced this week. Now we know who gets card #172.

Congratulations to Joe Mauer of the Minnesota Twins for winning the American League Most Valuable Player Award. While he was considered one of the favorites to win the award, he had some stiff competition, especially with two New York Yankee teammates also vying for the award.

P.S. We're down to the final award, the NL MVP. Will Albert Pujols take the expected win? Or will Prince Fielder or Hanley Ramirez spoil the party for the Cardinals' superstar? Stay tuned. jba
Posted by James B. Anama at 1:16 PM