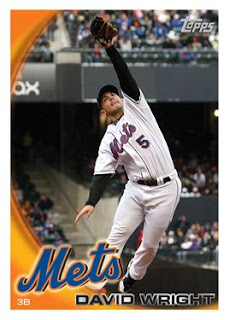 It's a slow news day, but Topps has decided to put out a bit more information about the product that will be unleashed to the masses around January 18, 2010. While most of the information is pretty much "old news," here are some tidbits that I thought were interesting, courtesy of the number one source in the Hobby:

Okay, so the "Cards Your Mother Threw Out" insert set is a reprint set that will appear 1:3 packs of regular (1:1 jumbo). The backs of each card will present a brief summary of the history of that year's design and certain quirks about that year's set (I am so looking forward to the 2006 Alex Gordon explanation). What I noticed today was that there will be a card "BACK" variation (called appropriately enough "The Cards Your Mom Threw Out Original Backs") to each of these cards which will come 1 per box, meaning these will be a lot harder to find. So if you want a set of cards that features the reverse of every year's Topps card from 1952 onwards, this is the set for you.

Other 1 per jumbo pack insert cards will include cards from the Legendary Lineage Past and Present (1:4 regular), Turkey Red (2007 design, 1:4), The History of the Game (great baseball moments, 1:6), Tales of the Game (quirky baseball moments, 1:6), Peak Performance (1:4), and When They Were Young (cards of current players as kids, 1:6). So add the gold parallel cards (1 in every pack, regardless), and the Toppstown card (also 1 in every pack regardless) and that means every jumbo pack will include 9 insert cards. Let's hope that every jumbo pack comes 39 per pack, otherwise it's not going to be easy to get a full base set (330 cards) from a box of 12 jumbo packs.

With the Yankees winning the World Series, it's all Yankees, all the time as Topps will include:

And finally, Topps has announced their plans with WalMart and Target. We get the blaster boxes with manufactured patches again. But more importantly, we're going to see the return of 1951 Topps Red Backs and Blue Backs. Each series (1, 2, U & H) will be 15 cards each, featuring stars from the past and today, with packs at WalMart getting the blue backs, and packs at Target getting the red backs.

P.S. The card of David Wright is included just to see if a couple of ladies out in New Mexico still read the blog. And while I initially thought it looked like he had grown his hair, it looks like the lights from the scoreboard made the clean cut third baseman's hair a lot longer than it really is. jba
Posted by James B. Anama at 4:48 PM

This sounds like a set worthy of buying few blasters....And Jan 18 will come pretty quick once we get past Christmas (will I have any money left??)

Interested to see who will be in the Target and Wal-Mart 1951 sets and if they will be mini's like the original cards or regular size. I'm hoping Ruth, Mantle, Jackie Robinson and maybe Musial are in the set! Either way, I can't wait for January!

I think the base cards are butt ugly! Too much of a bad graphic. The inserts better be good looking and plentiful if Im gonna bother with this stuff.

"Here’s what you can expect (with some unannounced surprises)…"

What will the "unannounced surprises" be? January 18th can't come quick enough!