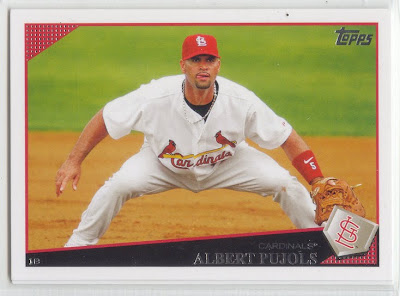 A couple of weeks ago, I mentioned that Topps reserved six cards for the AL and NL award winners that were going to be announced this week. Now we know who gets card #327.

Congratulations to Albert Pujols of the St. Louis Cardinals for winning the National League Most Valuable Player Award, his third, unanimously. There was no doubt who would wind up the victor as many within the Hobby penciled him in as the MVP even before the votes were tallied.

Awards season is now officially over. This officially ends the 2009 season. The Hot Stove is now heating up, and 2010 Topps is coming soon.