(Because I missed doing this on Friday, I'm running the 2011 Topps Archives article tonight. I will have another one for next Friday at 9:00 AM CST.)

No MLB team in the seventies, eighties, and nineties defined the words consistency and loyalty than the Los Angeles Dodgers. Even in the advent of free agency, the Dodgers seemed to be able to hold onto their players and managers for long periods of time. Think of it this way. Before today's subject became manager of the Dodgers in the middle of the 1996 season, the Dodgers had only two managers from 1954 to 1995 (Hall of Famers Walter Alston for 23 seasons and Tommy Lasorda for about 20). And from 1973 to 1981, the both Dodgers skippers penciled into their lineup cards the same four guys to play in their infield. There is a well-written baseball card blog named after the four of them, but Dodgers fans everywhere who grew up during the 70's can probably recite their names in their sleep: first baseman Steve Garvey, second baseman Davey Lopes, third baseman Ron Cey, and the shortstop, our featured player today, Bill Russell.

Russell was a lifelong Dodger, who played in parts of 18 seasons for the team. During that time, he became a three-time all-star, named the starting SS for the 1980 team. He hit 46 career home runs in his 18 seasons, but power was not expected from the shortstop position in the seventies. He actually wasn't an outfielder when he first joined LA. He was an outfielder at first, but Alston found better use for Russell's arm at shortstop than in any of the outfield positions. He became the full time shortstop in 1972, and two years later, was part of an infield tandem that lasted eight seasons. There have been double play combinations that have lasted more than ten years (Trammell and Whitaker of the Tigers comes to mind), and here and there, you find teams with three guys in an infield that play two to five seasons at a time (Dunston to Sandberg to Grace was a mantra in Chicago during the late 80's and early 90's), but to find a full infield, four players, to stay together for even eight years is unprecedented, even under today's standards. And if you add the years that Steve Yeager was the Dodgers primary catcher (1974 to 1980), and you have the same five guys covering the infield AND home plate for an eight year stretch. That just doesn't happen anymore.

After his long career, he became one of Tommy Lasorda's coaches. He spent a couple of seasons as a manager in the Dodgers minor league system, and was seen as the heir apparent to Lasorda when the time came for Tommy to retire. When Lasorda had a mild heart attack in 1996, Russell was named the interim manager. He was named the permanent manager before the end of July that year. When News Corporation (under Rupert Murdoch) decided to clean house, Russell was one of the casualties, ending a thirty year association with the Dodgers. After working as a coach for the Devil Rays and even managing a couple of minor league teams, he now works for MLB's umpiring division.

Of the four long time infielders, only Bill Russell was not included in cards for any of the Archives or Fan Favorites sets that came out in 2001-2005. So now it is time to add the shortstop that held the infield together for all those years to our Archives set. 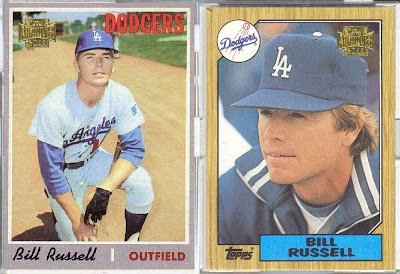