Our next subject for the 2011 Topps Archives Project began his 23 year career as a member of the Houston Colt .45's in 1963. After six years with the .45's/Astros, he went north of the border to play with Les Expos de Montréal, the New York Mets, the Detroit Tigers, the Expos again for a season, the Texas Rangers, and finished with the Mets for a second go around in 1985. Along the way, he became a six time all-star, a seven time candidate for the MVP award, and endeared himself to French-Canadians everywhere by learning French. He was the first player in Expos history to have his number retired. His given name was Daniel Joseph. But everyone knows him better as Rusty Staub.

Known as Rusty because of his red hair, was only nineteen years old when he made his debut with the Colt .45's as their first baseman. He was the cleanup hitter on the day that the team trotted out the youngest starting lineup in the history of baseball. In 15o games that year, he hit 6 home runs, drove home 45 more runs, and batted a paltry .224. But the Astros were a young team, and growing pains were to be expected. Fortunately for Staub, as he got older, he got better. In six years with Houston, he became a two-time All-Star and saw his career batting average go up to .273 before being traded to Montréal in time for the 1969 season.

As a charter member of the Montréal Expos in 1969, Staub took over right field duties and was the team's leading slugger (.302, 29 HR, 79 RBI's). He also decided that if he was going to play and live in Montréal, he might as well pick up the lingo. So he learned how to speak French, which gained him the respect of the French-Canadians. It was here where he earned the nickname "Le Grande Orange," again because of his red hair.

He was traded to the Mets in 1972 and led the Amazin's to the 1973 World Series against the Oakland A's. And before he left, he became the first Mets player to surpass 100 RBI's.

Since his retirement, he was a restaurant owner, a Mets broadcaster, and more importantly, established the New York Police and Fire Widows' and Children's Benefit Fund in 1986, which raises and distributes money to the families of firefighters and police officers killed in the line of duty.

Rusty Staub can make the claim of being the last player to have a baseball card during his career to include his career as a Houston Colt .45's with his 1986 Topps card. No card since then in Topps baseball card sets have had a player for the .45's. He was overlooked when the 2001 Topps Archives set came out, so it is only fitting that we add Mr. Staub to the 2011 Topps Archives Project. 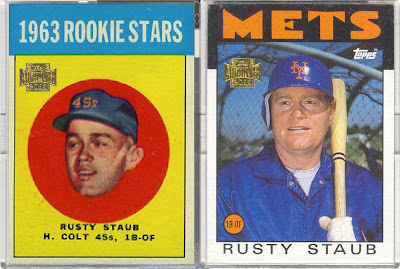 I think Staub is the only player to collect 500 hits for 4 different teams.

got to love anybody who played for the 45s

As a fellow red-head, I support your inclusion of Rusty in the archives set! I'm also happy you brought up his career with the Colt .45's. I remember seeing those stats on the 86 cards and then wanting to learn more about that team.

As inserts, make Staub cards from '72 and '73, the years he wasn't in the set because of a licensing disagreement....