1990 Topps Major League Debut 1989: Steve Finley, Ken Griffey, Jr., Omar Vizquel.
The year was 1990. Topps Magazine Issue #1 (Winter 1990, with Jose Canseco on the green-bordered 1990 Topps designed cover) was unleashed upon the masses. Before the Internet became mainstream, before blogging, during the time the number one source in the hobby was actually revered and the price guide mostly relevant, finally there was a magazine for those of us who loved Topps cards. I remember seeing this magazine for the first time at the Phar-Mor (they don't make them anymore in Chicago) and wanting to buy it right there and then. I was only immersed in the hobby for two years at this time, but something instinctively told me to buy it ($2.95 back then).

Anyway, in amongst the stories previewing the upcoming 1990 Topps Baseball set (and the rainbow colored borders pictured in the poster checklist), on page 8, in the "Topps in the Field" section, just above the article about the 1990 Topps George Bush card, was a story headlined "V.S.O.P" or Very Special One-Time Performance. It went on to say that (as of 1989) over 13,000 players have played in the Major Leagues. And whether this player played in one inning in one game in their ML career, or went on to a Hall of Fame career, each one of them had one thing in common, that major league debut. So with that in mind, Topps created a new baseball card set called "Major League Debut." The first edition utilized the brand new 1990 Topps design, (with an awesome shade of crimson), and each card in the 152 card set (including two checklists) honored the 150 rookies that made their major league debut in 1989.

Everyone from Ken Griffey, Jr. (who debuted on April 3, 1989 and was one of three players to make his debut that day) to Gary DiSarcina (who made his first appearance on September 23, 1989, the last player to debut that season) was included in this set. Twenty-three players would go on to become All-Stars at some point in their careers. We'd all get to know their names on a regular basis like Sammy Sosa, Albert Belle (known then as Joey), Larry Walker, Robin Ventura, Andy Benes, Juan Gonzalez, Greg Vaughn, and more were part of this set. Players who had high expectations, but eventually faded from the spotlight (Jerome Walton, Hensley "Bam Bam" Meulens, Ben McDonald) were also here. This was the only set that would have Topps cards of Yankees pitcher Bob Davidson, and Joe Skalski of the Indians, Larry Arndt of the Athletics. And if you're asking who these last three guys are, let's just say that they are among the few players whose major league career lasted no more than two games (and in the case of Davidson, just one inning in one game).

Regardless of how their careers turned out, all of them debuted in 1989.

It is now 2009. Four teams were formed since then. The Milwaukee Brewers, long a franchise in the American League, was now a National League team. At any given point during the season, there were 750 players on active rosters (not counting those on the disabled list). And in amongst the shuffling of talent, 204 baseball players, some who've toiled in the minors for a very long time, finally got to step onto the field of a major league stadium for the very first time and play at least one inning of major league baseball. Seventy-six of them were position players, the other 128 stepped onto the pitcher's mound for the very first time. Of the 204, one was born in 1989 (Madison Bumgarner), and the oldest player to debut was 40 years old (Ken Takahashi).

Just for fun, let's compare both classes:
Of the players from the debut class of 2009, just like in 1989, there could be some Hall of Fame candidates. Most may go on to All-Star caliber, or very long careers in the bigs. And for some, this may be their only year in the majors. But all of them can say that they achieved their dream of being a Major League Ballplayer.

And nothing can take that away from them.

I've clamored before about wanting to bring back the Major League Debut set. But I know in today's age of exclusive contracts and rookie card restrictions that a set of this type might never see the light of day again. And although I have a feeling that many collectors would not want to get a set that might have stars but plenty of "never will be's" amongst them, a set like this could contain the only card of a player who played in one inning of major league ball. 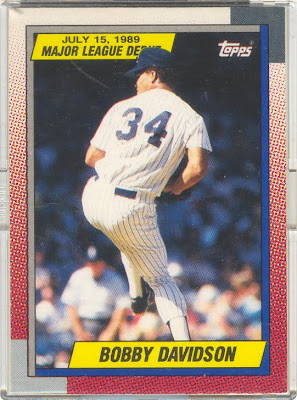 1990 Topps Major League Debut 1989: Bob Davidson.
At least Bob Davidson got a card in the 1989 set, his one inning of one game got him onto the 1989 set. Who knows what the future will bring for the 204 players who first appeared in 2009. Most might never play in the bigs again, disappearing in the obscurity of minor league baseball for the rest of their professional careers. A set like this would give them an albeit slim piece of cardboard immortality.

P.S. Don't forget to enter the contest to guess who makes the 2009 Topps All-Star Rookie team. Details are above the post and the poll. jba
Posted by James B. Anama at 1:00 PM

Great post!!! The combined stats of all of the debutantes was pretty astounding! Thanks, I love a good, well-researched story...

I just bought that set not too long ago, just to get the Griffey and the Reds that were in the set. I liked it and wish they would bring it back.

I loved those Topps Magazines and picked up a new copy when they came out. It's a shame the internet has killed a great info magazine like that today.....

I have so many of those cards! Bringing back some great memories. I still have all my cards in plastic. I'd love to see more posts on cards from the 1980's!