The sell sheets for this year's Topps Baseball Factory Sets are now live. Please take a look and see what is in store for 2010: 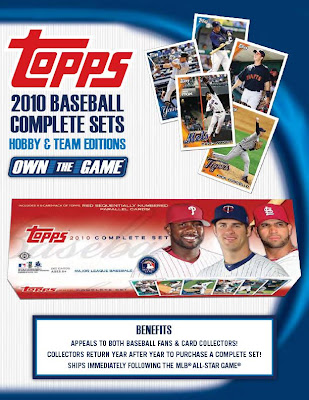 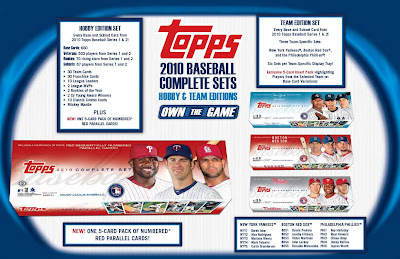 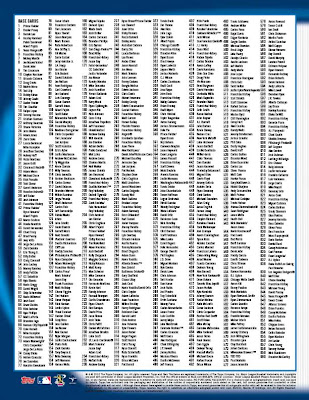 Again, they're hawking team sets. Not surprising since this has been done since 2004. Three teams this time (the Yankees and Red Sox...geez, what a surprise...and the Phillies!!!) No Cubs? No Dodgers? What, are there not 27 other teams? Don't they play in the midwest and west coast? Why even bother this year???

The checklist (third picture) shows card #638 as Babe Ruth/Lou Gehrig & Paul Konerko??? Granted, Konerko is a slugger, but I think this is a mistake. Upon further review, card #636 looks to be Evan Longoria/B. J. Upton, meaning that #637 is probably the Ruth/Gehrig card, and #638 is slotted for Konerko.

With the bonus in the regular set being red parallels (of what I'm assuming to be the base set), and they're numbered to boot, I guess that means that there won't be any rookie exclusives this year (unless they're saving them for the Target/Walmart sets and the Holiday factory sets). Hey, that means I don't actually have to go out and buy a factory set for the bonus cards.

The exclusives in each of the team sets are veteran/All-Star player heavy. The Yankees (#'d NYY1-5) are:
Representing the Red Sox (BOS 1-5):
Finally, the Phillies (PHI 1-5):

Also, in case you haven't seen it yet, there will be an All-Star FanFest exclusive Topps factory set:

A bonus 5-card pack of Angels cards will be included with this set. Who's on it at this point has not been announced yet.

As always, the checklists are all subject to change. Happy Hunting!!!

JayBee Anama
Posted by James B. Anama at 7:00 AM

JayBee I love the Factory sets - I get them every year without fail - although I'm now 3 years behind (gotta get 08, 09 and 10). Are you like me in hoping that they do away with the Classic Combo cards? Or any multiplayer cards for that matter. They make cataloging by player very difficult! Can't wait to get the set though!
Nick J

I'm interested in the Ruth/Gehrig combo card. Wonder if will be in Series 2 or a just in the factory sets?