Thanks to the Topps Card Randomizer, introducing the Random Topps Card of the Day for Wednesday, April 7, 2010: 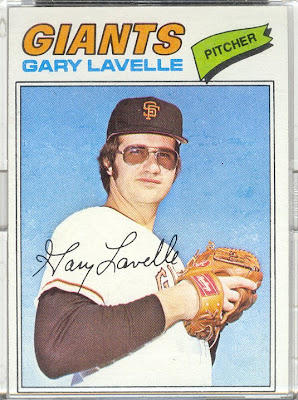 Love the aviators. Everyone had them back then. I guess contacts have taken over these days.

Actually, showing saves would not help much to determine status as starter or reliever, has only a select few guys on a staff ever get a shot at a save.

Fast fact: Yogi Berra didn't sign with the Cardinals because they didn't offer him the same amount as Joe...On the surface, the Cardinals seemed to think Garagiola the superior prospect—but team president Branch Rickey actually had an ulterior motive: knowing he was soon to leave St. Louis to take over the operation of the Brooklyn Dodgers and more impressed with Berra than he let on, Rickey apparently planned to hold Berra off until he could sign him for the Dodgers. The plan was ruined when the Yankees got to him first, signing him for the same $500 bonus the Cardinals offered Garagiola.