(Tonight's introduction is in honor of George Michael, the man who gave us national sports coverage before SportsCenter ever became relevant, who passed away on December 24, 2009.)

Now, through the use of the Topps Card Randomizer, the Random Topps Card of the Day for Tuesday, December 29, 2009: 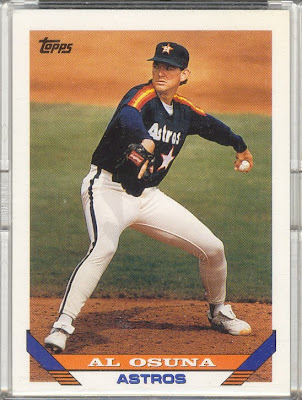 On a totally unrelated note, growing up, I waited past the NBC 5 news at ten and the Sunday Sports show at 10:30, just so I can watch George Michael's Sports Machine. This was before our family had cable. And just hearing the sound effects and theme music to Michael's show got me read to watch an hour of non stop sports coverage. Of course, I didn't understand it all in the beginning, but to see highlights from games played in other cities (this is the late 80's people...) was a thrill. George Michael made watching highlights of even the most boring games interesting, and he somehow managed to give every game the same focus and energy, whether or not the games had playoff ramifications, or if they were just schedule fillers. I especially looked forward to the last Sunday of the month, because it meant that he would go through the world of sports (everything from baseball to WWF wrestling...yes, I know it's now WWE) for the "Plays of the Month!"

The show ended in 2007 due to budget cuts. And what really impressed me was the fact that George Michael would rather cut himself than anybody from his staff. To me, that was a classy act. When it was announced that Michael was pulling the plug on his show, even the announcers on ESPN gave credit to him, noting that if it was not for him and the Sports Machine, there probably wouldn't be a SportsCenter the way it is seen today. His show was on nationally at a time when cable was still a brand new concept. And ESPN's franchise show definitely would not have any legs to stand on if it didn't take notes from the Sports Machine. Rest In Peace Mr. Michael. Watching sports highlights will never be the same again.