The sell sheets for Topps first foray into licensed minor league baseball cards are live!!! Take a look and see what they have in store for the first series of 2010 Topps Pro Debut: 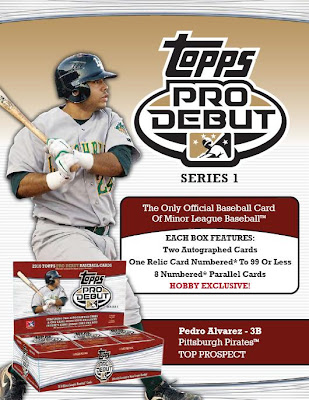 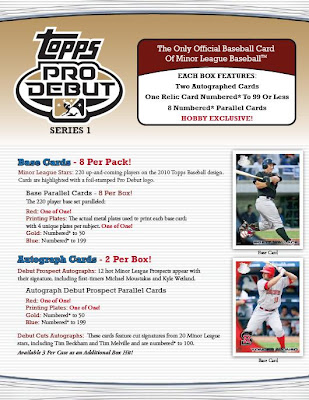 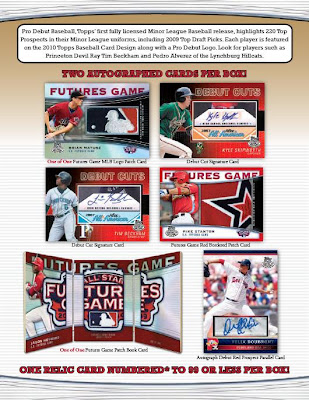 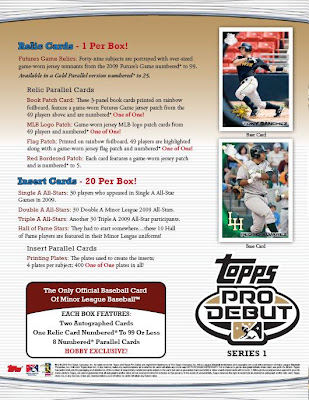 Perusing the checklist, (which of course is subject to change), I see that many of the players who will appear on this set are in the the low minors (Class A, Rookie Leagues). Not too many players in AA or AAA leagues, which I think defeats the purpose of getting the MiLB license. But then again, who's to say that Topps won't come up with a product for the teams in both of the high levels later in the year. Many GCL and Arizona teams represented, as well as a handful of players from the five A leagues (Carolina, California, Florida, Midwest, SAL). All 30 MLB teams have players among the first 200 cards. The team with the most? The Yankees of course.

Now I know what many of you are thinking. "Why the sudden interest in minor league cards?" Well, because the set utilizes the 2010 Topps design, I thought it would make a nice complementary set to add to the 2010 collection. And while I'm not planning on looking for relics and autos, the base inserts (which does by the way have AA and AAA players) are worth getting. And thanks to the CMG agreement, we will also get ten HOF players in their minor league unis (Babe Ruth, Rickey Henderson, and eight others).

It looks to be a fun set. Can't wait to see what full master sets will run on the Bay in March.

Interested to see what they do with Ruth and Mantle. Wonder if they'll be regular base cards from their minor league days. Joplin Miners for Mantle and Baltimore News for Ruth. I may have to think about getting them if that's the case.

There's not much need to include a lot of AAA players in a prospect minor league set. Most of the prospects who were a AAA last year should also qualify to be in the regular Topps set.

The guys who were in A ball last year should be moving up to AA this year, and AAA is mainly a place to stock guys who will fill in when somebody on the major league roster gets hurt.

Sweet, I like the look of these. As long as the price point is in line with regular Topps, I'll definitely be putting a set together!

I dont quite understand the cut signatures? Why not just have them sign the damn card instead of cutting one out of an AFLAC release of only a few years ago.

I dont really see how Topps is getting away with a Monopoly on the market either. I wont be buying any of this crap. I had a bad feeling Topps was going to push out the smaller markets, and gain control of MILB. They cant even make a quality autographed prospect checklist anymore.

I LOVE this product. I think topps agreement that allows them to make cards of anybody is going to be great for the hobby. I can envision them doing a huge set someday with EVERY player in organized ball (like a 5000 card set or something) or even doing "organizational" sets where you can buy a box of packs with only players from a certain team like the Red Sox oraganization. Something like that would sell in New England thats is for sure. I'm not sure if the NE market is enough for Topps to make money off of for something like that, but I'd love to see it. A 300 card Boston Red Sox only set. AIM me with your thoughts or reply to my post please.

The reason they have to use the cut signatures is because of Razor's exclusive deals with these players that they signed after they were drafted. These cut sigs were done during the AFLAC game which is obviously before they were drafted. Thats the only way Topps could use these particular autographs.