Jeremy DeJong, the creative mind over at Jeremy's Custom Cards wrote a comment a couple of weeks ago, asking if I was interested in the Roger Maris SP card that he happened to have in his possession. Needless to say, absolutely I was interested. So, an e-mail was sent.

In his reply, all he wanted were current Tigers cards as he lives in Lakeland, FL, the Tigers spring training home. He also stated that he had one of the seven 2003 Topps Record Breakers Nolan Ryan No-Hitter cards that have been buried in my want lists for quite a long time.

So an envelope came in the mail today from Florida. Here's what was inside: 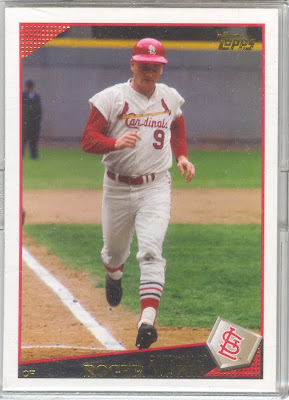 Hope you enjoy these. I don't really collect the S.P.'s, and I'm sure the card would be more appreciated in your collection.
Definitely will be appreciated Jeremy. Mr. DeJong also included this Nolan Ryan RB card: 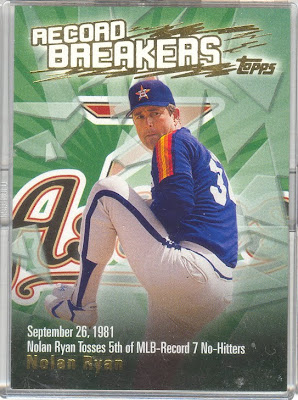 Now I've been searching on and off for the seven cards that comprise this set. And while it's been on my want list for almost forever it seems, it wasn't one of the high priorities to finish. But this is a good start, and hopefully, eventually, I'll start searching for the other six (if anybody has any of the other six cards, this is card #5, please e-mail me.)

Finally, there was a third card in the envelope. It was an autographed card no less. I don't think there could be any value placed on this, and I'm pretty sure it's a rare card. It wasn't something I was looking for, but it will go into the binder along with all my 2009 Topps cards: 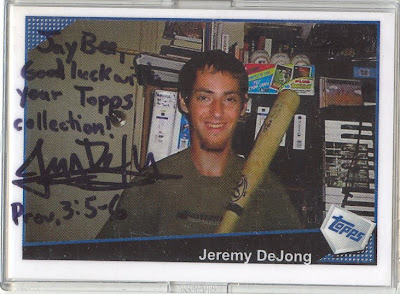 Jeremy, thank you very much for the cards. The background of your card looks similar to my basement. Bookshelf of cards, miscellaneous stuff on top of bookshelf. Baseball cards and other things scattered everywhere. If I didn't know any better, I'd swear you found your way to my house to get the picture taken.

A bunch of Tigers cards will be on their way to you before the end of the week. I promise.

Two down, 23 to go. The quest continues.

P.S. For those wondering, the Bible quotation included with his autograph is Proverbs 3: verses 5-6, which reads (according to the New International Version):

5 Trust in the LORD with all your heart, and lean not on your own understanding;
6 in all your ways acknowledge Him, and He will make your paths straight.
Amen. jba
Posted by James B. Anama at 7:00 AM

Email ThisBlogThis!Share to TwitterShare to FacebookShare to Pinterest
Labels: 2009, thank you, topps, U and H shortprints, updates and highlights